This Thrunite TC20 was provided by Thrunite for review. Try coupon code "20%" to save 20% on some products at thrunite.com including the TC20 as of this writing. The TC20 is also available on Amazon. 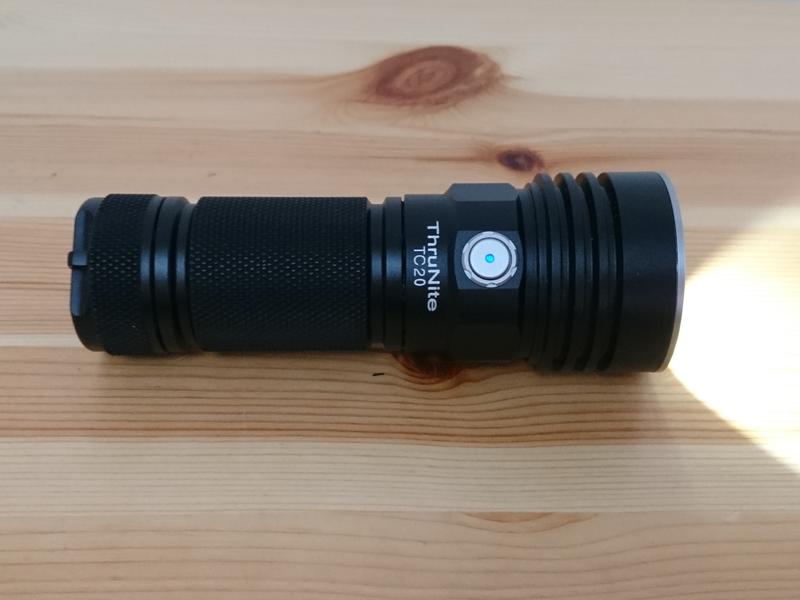 The TC20 is a mid-size general-purpose light with high maximum output and USB charging. Based on a 26650 Li-ion rechargeable battery, it's larger than most people would consider for pocket carry, but is suitable for a belt holster. The size fits most use cases other than everyday carry, and the 26650 hold a lot of energy. While some might question the use of a 26650 rather than a 21700, the question is largely academic for most users who aren't buying multiple lights and standardizing on a battery type.

The overall concept is solid. The TC20 is a light for the house or car, or for when you know you're going to be using it. Thrunite tells me the TC20 was their best selling light in 2018, which I found surprising since Thrunite sells several small lights under $20. Lumens sell lights, I suppose, and 3800 is not a small number. 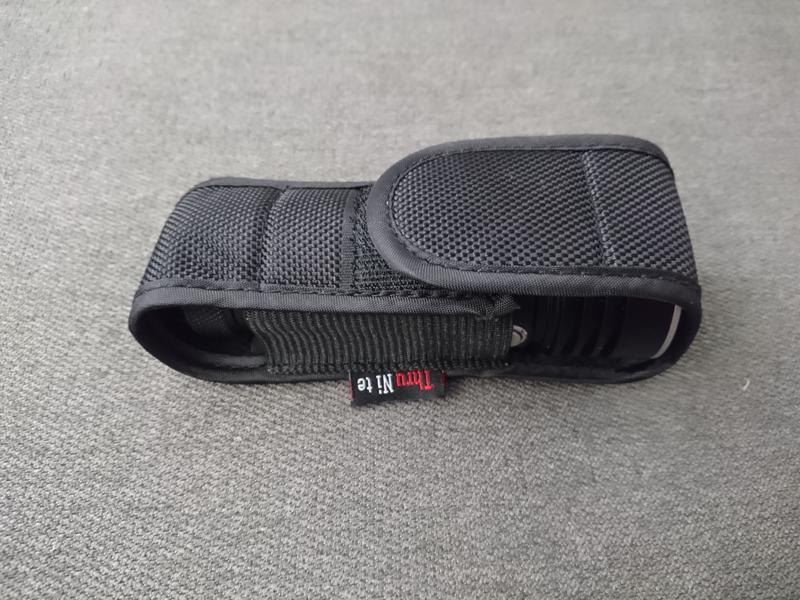 The TC20 has a space-efficient body that takes up as much space as the light's features require, and not more. It shares its general look with the T10 II and Neutron, oddly including the hex-shaped anti-roll area found on those lights, but in combination with a head that's wider so no anti-roll functionality is actually present. The side switch is more proud than on pocket-oriented models so it can be felt through gloves.

The emitter is a Cree XHP70.2. Thrunite has wisely used a textured reflector with this emitter to reduce the rainbow appearence of the beam for which it is infamous. The user interface is Thrunite's usual e-switch design in which a short press is always on/off and there are shortcuts from off directly to the lowest, highest, and last-used modes. No color rendering index is specified, which is typical for the industry, but something I'd like to see all manufacturers improve. CRI helps to show detail and more quickly identify objects. I'd like to see more modes or ramping in a light with such a wide output range, though the modes the TC20 does have look fairly well-spaced.

The USB charging is Micro-B rather than the USB-C used by most phones and tablets released in the past several years. Some may prefer this since the old connector is still ubiquitous, but as far as I'm concerned, it can't die soon enough. I wish the TC20, along with every other recently-introduced product with a USB port was USB-C.

The TC20 is well made. My only concern with the manufacturing relates to waterproofing. There was a lack of lubrication on the threads and o-rings. Lubrication is important for reliable waterproofing. My contact at Thrunite assures me they're aware this is a problem and that it should be fixed on newly produced lights. The only protection for water ingress through the USB port is a rubber flap; the port is not sealed when the flap is open.

Output is within the margin of error of the claim; I measured 3624 lumen at 30 seconds. Throw is not with 320m claimed and my repeated measurements all coming in under 250. The median number was 248, which is a bit lower than the 263 zeroair got. While there's nothing wrong with the TC20 being very floody, I do have to criticize it for the optimistic throw claim. Prior experience with Thrunite has led me to expect accurate numbers. Efficiency numbers are great, reaching as high as 183 lm/W on medium.

Overall, the TC20 is well-done and will serve its intended role quite well. 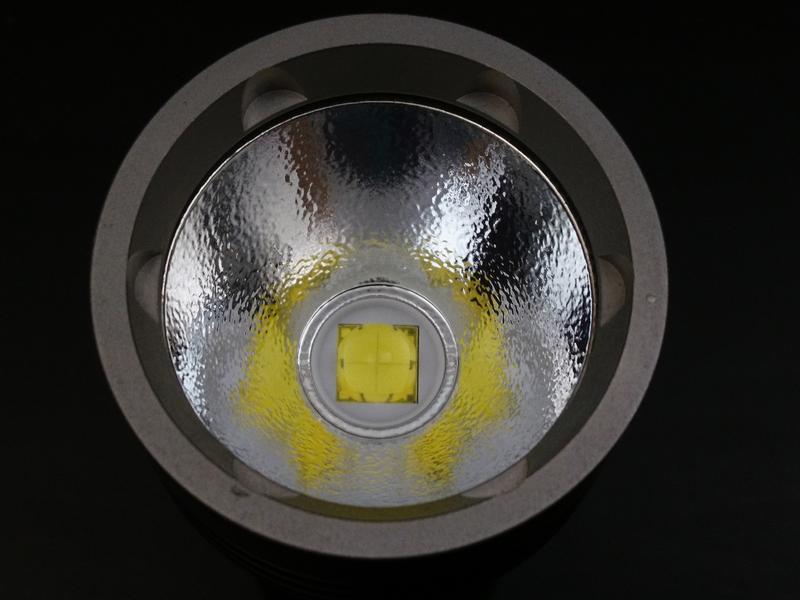 The TC20 includes a battery, USB cable, holster, lanyard, a split ring, spare O-rings, and a spare rubber seal for the switch button. All are of satisfactory quality, but I would have liked to see a MOLLE-compatible strap on the holster. 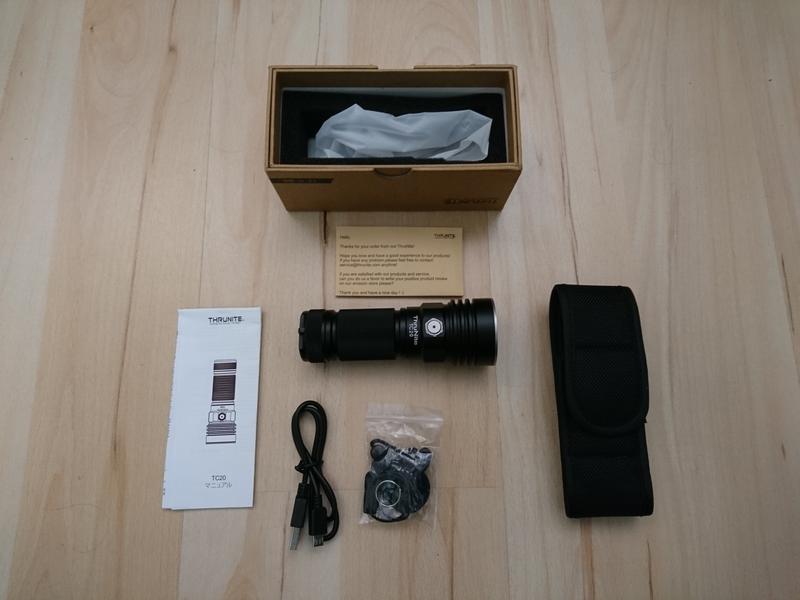 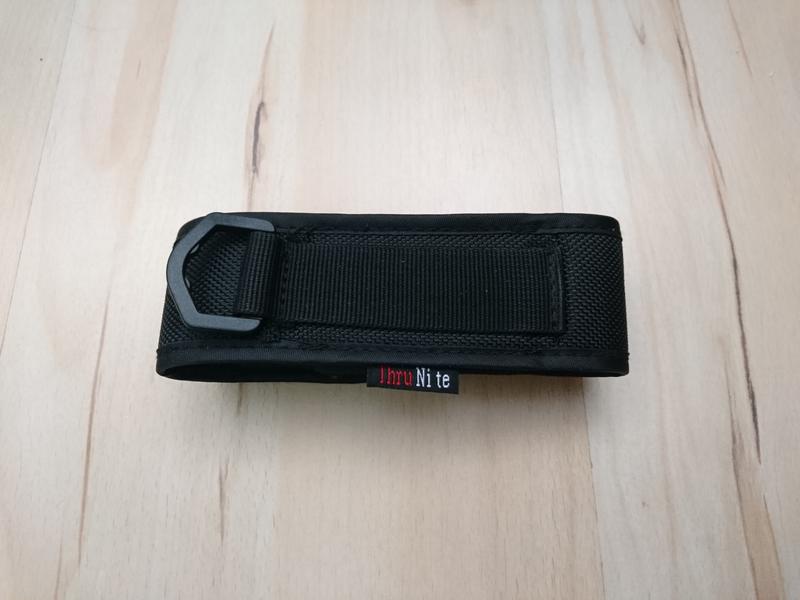 The TC20 uses a Cree XHP70.2, part of Cree's first high-power flip-chip line. The entire line is known for excess green in its tint and tint shift across the beam. The TC20 is no exception, but does mitigate the tint shift to a degree with a textured reflector to smooth out the beam. Color rendering is average for the industry with subtle differences in color being washed out.

There is no PWM or detectable ripple in any mode. 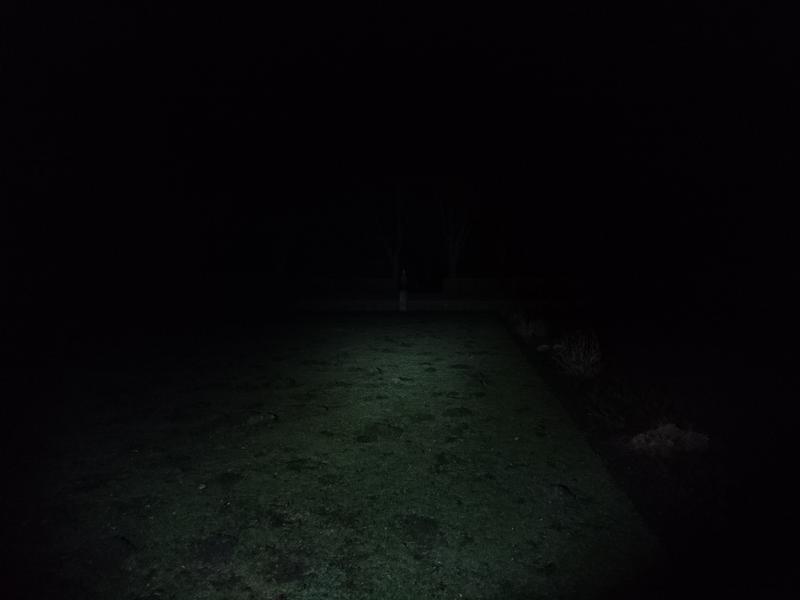 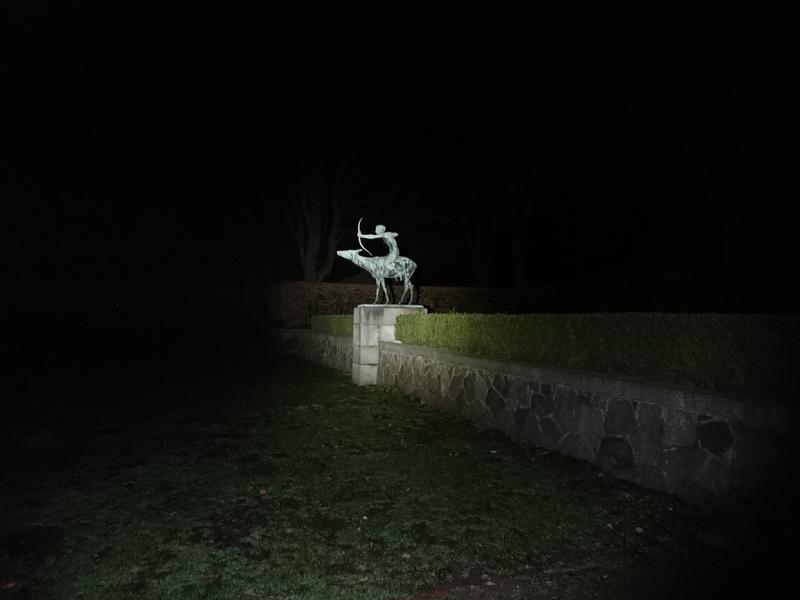 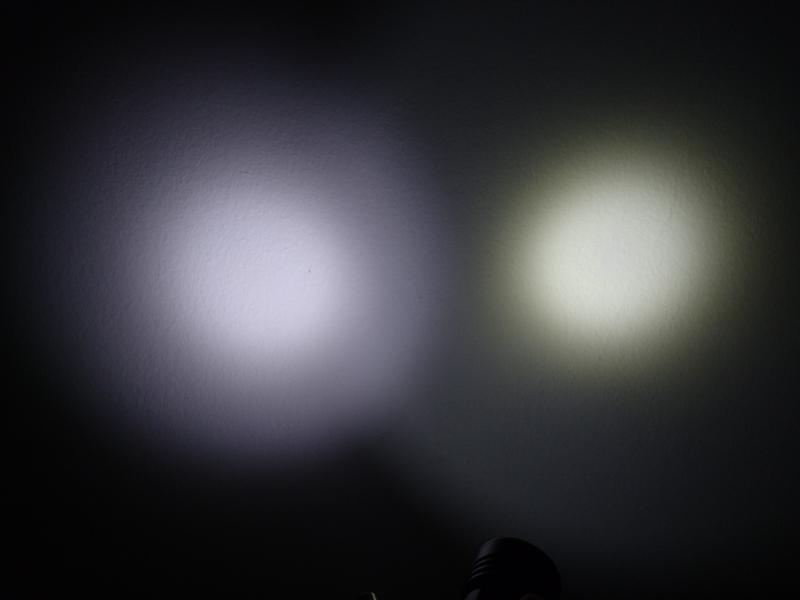 Contstruction of the TC20 is typical Thrunite: there are no machining flaws visible, anodizing is thick, and the threads come without significant lubrication. That last bit could have an impact on waterproofing, and I would recommend owners lubricate the threads themselves with silicone grease. Thrunite has assured me that the factory has been told to increase lubrication of lights produced in the future. 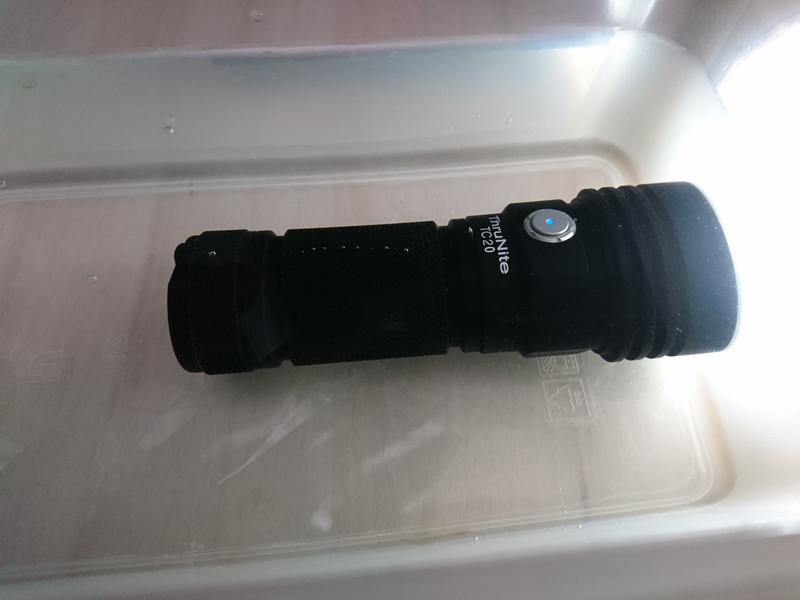 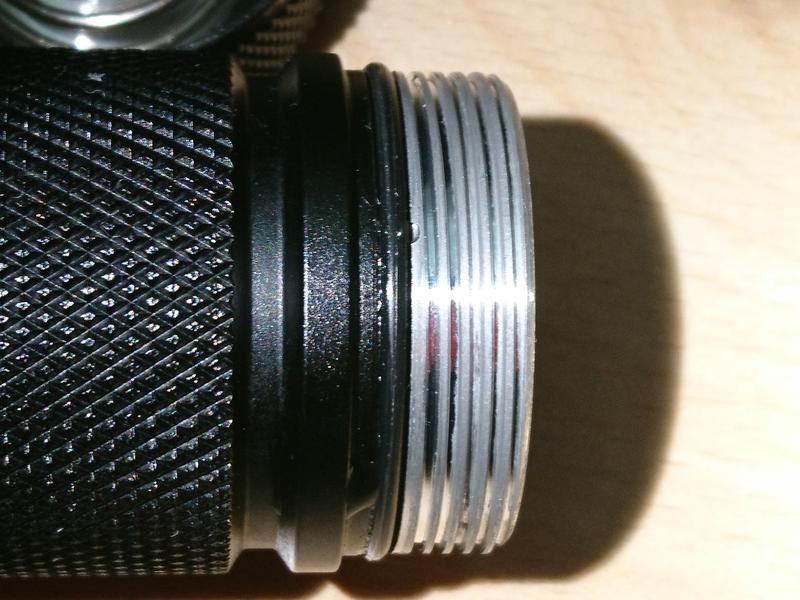 The TC20 feels good in the hand with sufficient, but not overly aggressive knurling. The button is more proud than on EDC-oriented models and easy to find by feel with bare hands. It's possible with gloves, though a recessed button would be easier. The included holster is entirely adequate for belt use, but the strap is sewn in place so it's not usable with MOLLE or other fixed webbing.

The included battery is a protected button-top with a Thrunite branded wrapper. As with Thrunite's 18650s, the wrapper is semi-transparent and the markings of the underlying cell can be read. It's a Sinowatt SW26650-50ME. On my Opus BT-C3100, the capacity tests at 5595 mAh. 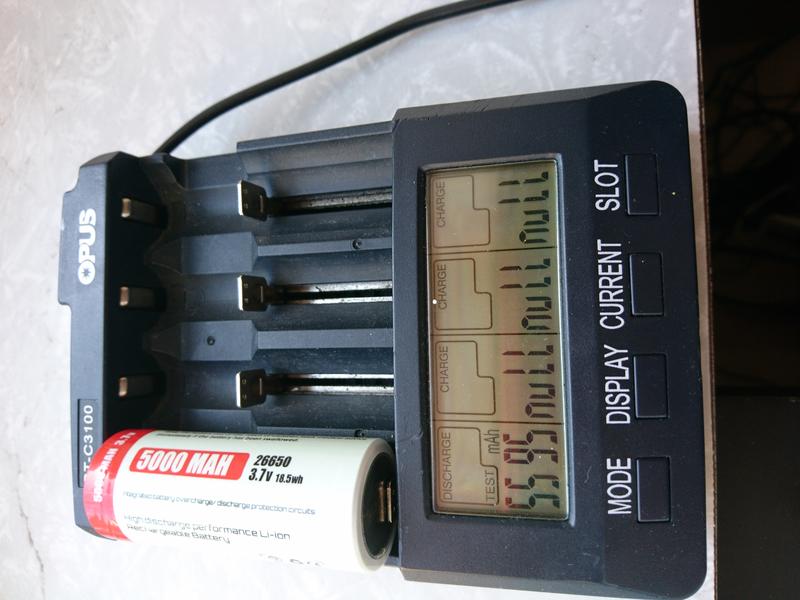 The TC20 provides some opportunities for enhancement. When I noticed output being reduced when the battery is low, I thought the resistance of the springs might play a role. Bypassing them using desoldering braid did, indeed improve the situation. While performance on a full (4.2V) battery is unaffected, at 3.7V, output climbs from 2384 lumens to 2950. 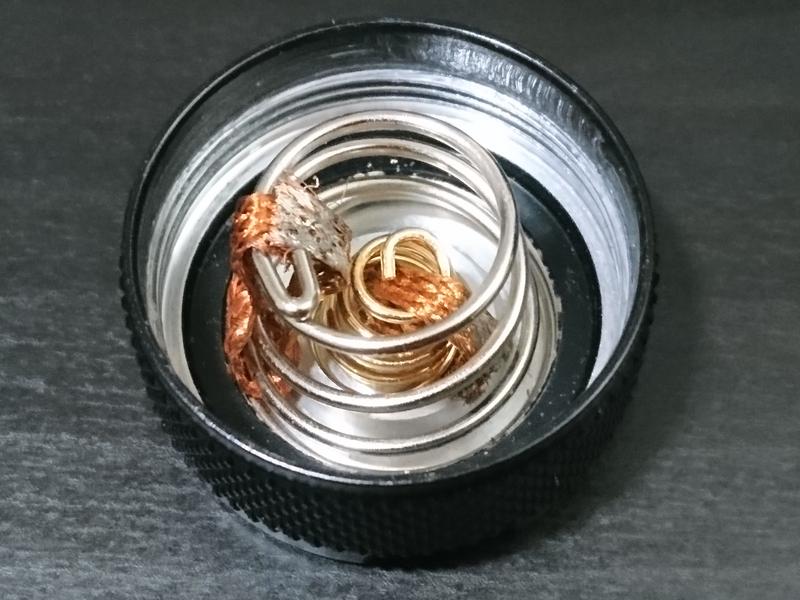 The bezel is not glued and was fairly easy to unscrew, granting access to the reflector and emimtter. The MCPCB is an uncommon square shape, but there's plenty of room to use third-party round boards. The centering ring on my sample appears to be improperly struck, but not in a way that affects function. 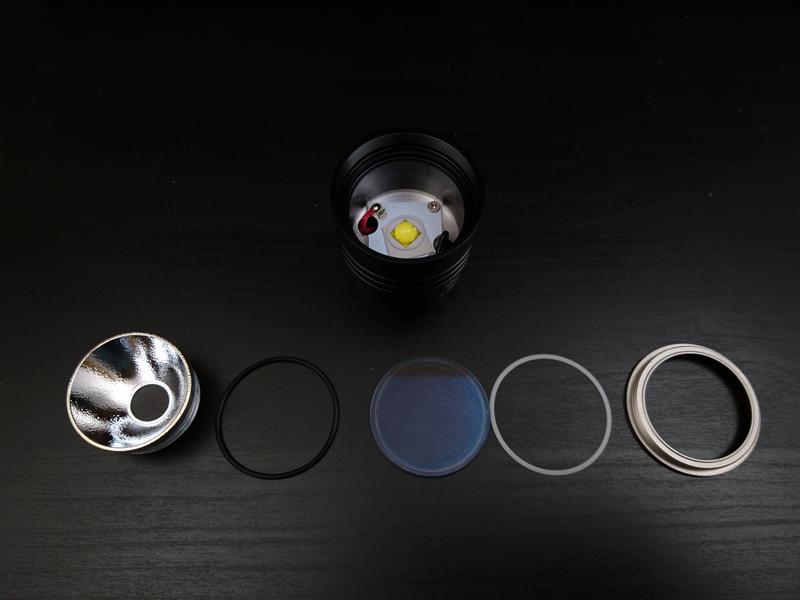 I've struggled to find an XHP70 or substitute I'm really happy with. I had decent results with a shaved 90 CRI 4500K XHP70A in my Acebeam L30, but dome-on in the Thrunite TH30, it was fairly green and had some artifacts. There, I corrected it with a filter and diffusion film. The same approach would work with the TC20, but it would become a pure flooder. I wonder if there's an optic and MCPCB I could fit in this for a multi-emitter setup.

A Cree XHP50 or Nichia 144A is likely usable here for more throw. I think it's likely too much current for a quad Nichia E21A. The Cree MT-G2 might just barely clear the opening in the reflector.