This Thrunite T2 was provided by Thrunite for review. Use coupon code "2020" at thrunite.com for 20% off everything at the time this review is published. The T2 is also available on Amazon (affiliate link) from the official Thrunite store.

Edit: December 1 - I got the bezel off and discovered the T2 is run at 12V, not 6V as I expected. That makes the GT FC-40, a high-CRI, domeless substitute for the XHP70 a viable swap. At least one BLF member has already done so with good results and I've ordered some of the emitters. 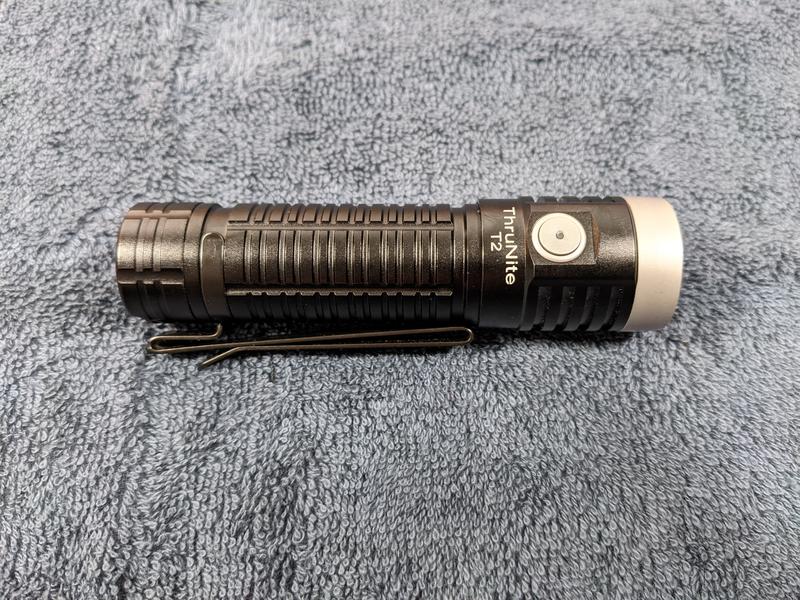 The T2 is a high-output 1x21700 flood light from Thrunite with USB-C charging. It is the most efficient flashlight in terms of lumens per watt that I have ever tested at 189lm/W in medium, taking the record from the Thrunite TC20 at 183. It's well suited to being a car light with its large battery and USB charging, as well as for household use, and carry in a holster or in a jacket pocket. It would make an excellent power outage light with its ability to light up a room all night in its medium mode. It may be more useful to many readers however to understand the T2 in terms of what it is not. While it has a usable pocket clip, it's not an everyday carry light for most people due to the weight and diameter. It's certainly not a hat light as shown in one of the product images. It's a light you bring when you mean it. 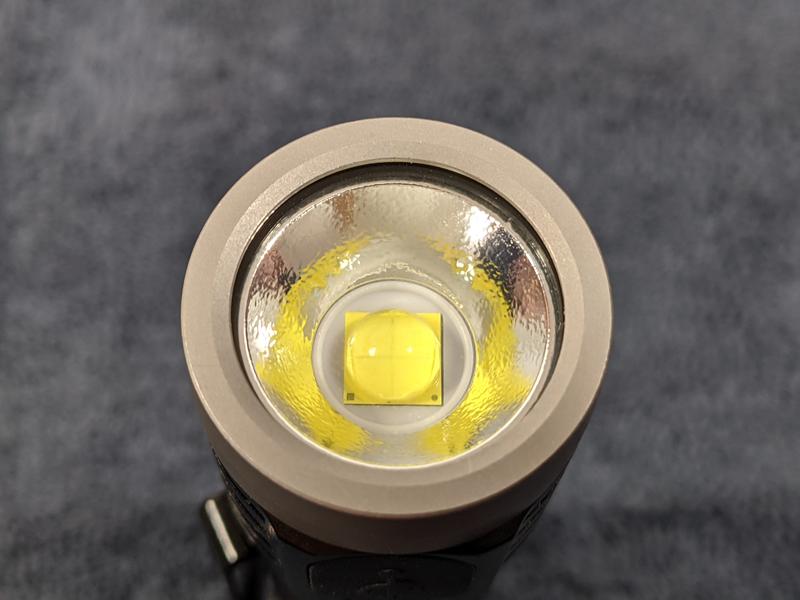 The light is well-executed for those who value efficient high-output over all else, but makes sacrifices in color and beam quality to get there, and I must repeat that it's extremely floody. It's more floody, for example than the Lumintop FW3A or Zebralight H600F series, and those lights have frosted/diffused optics. At arm's length, the T2 illuminates everything in view, but to see even large objects much past 100m requires use of the max mode, which can only be achieved with the battery near full in spite of the T2's boost driver. High is available until the battery is nearly empty, with flat output unless the light overheats, in which case it throttles to just under 1000 lumens. The included battery has an extra contact on the positive end, but the T2 does not use it. Standard 21700s may be used and charged in the light, but they must be sufficiently long to make contact reliably, and sufficiently thin to fit in the tube; some protected cells are tight. A spacer, such as a rare earth magnet makes shorter cells reliable.

Here are the full details on Thrunite's flood monster:

The T2 comes in cool white or neutral white; this is the cool white version. 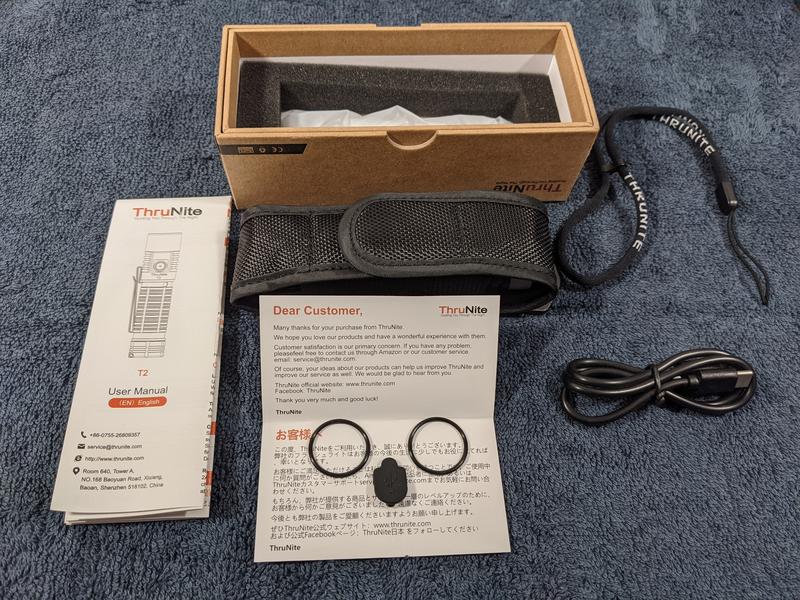 The UI is similar to that found on older Thrunite models, but adds an electronic lockout. The electronic lockout means it's impossible to exit firefly and get low unless that was the last of the three medium modes used. I find the mechanical lockout more convenient to use.

Accurately measuring maximum output on Turbo was not possible due to the increased resistance of a series ammeter reducing output. Current was approximately 6A for 3200lm.

An indicator light in the switch turns blue when the light is turned on with over 20% capacity remaining, red from 10-20%, and blinking red under 10%. The flashlight steps down, and eventually turns off at 2.8V, making the use of unprotected cells safe without any special attention to over-discharge.

The T2 uses a Cree XHP70.2. Its beam has the typical characteristics of that emitter: lots of light, with noticeable green tint, and a lot of tint shift across the beam. It's not pretty, but no single emitter commonly seen in flashlights matches its efficiency. 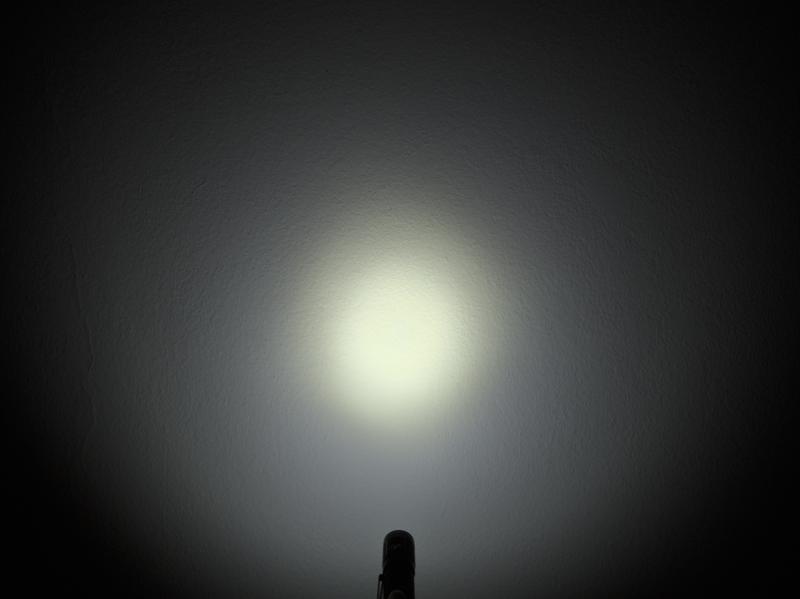 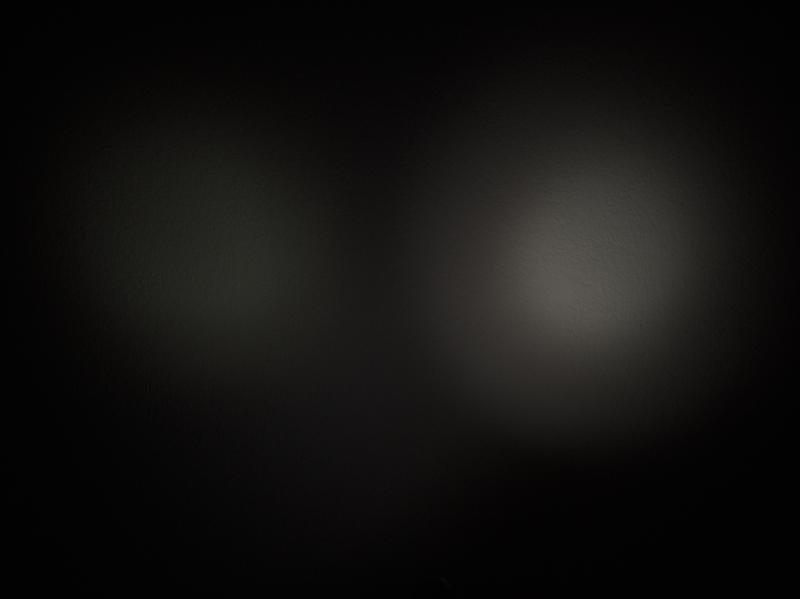 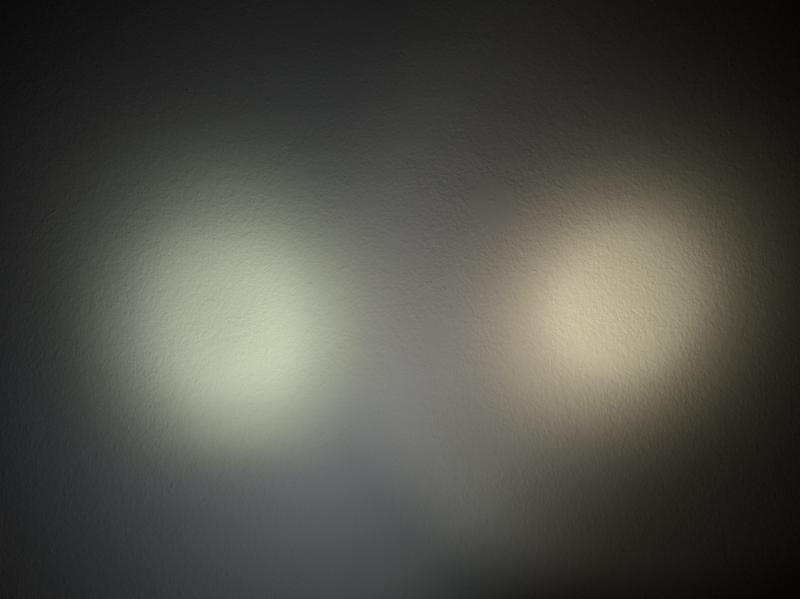 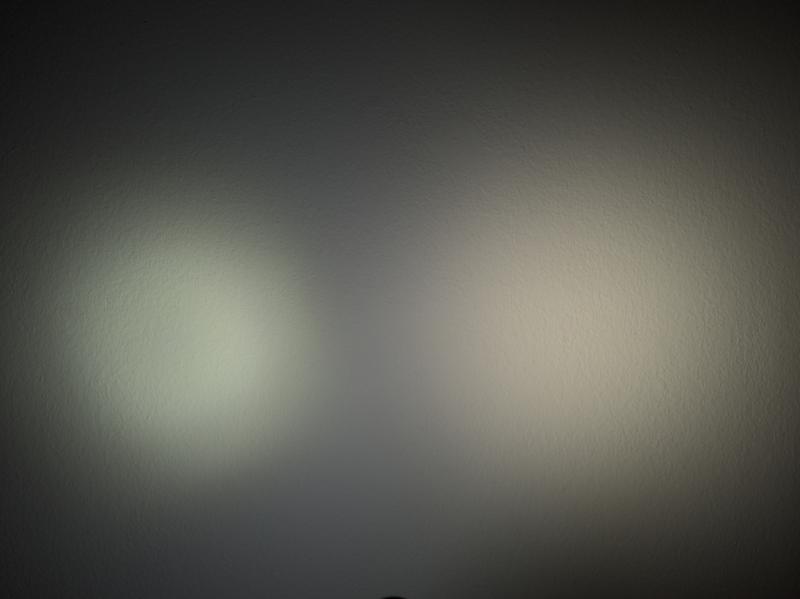 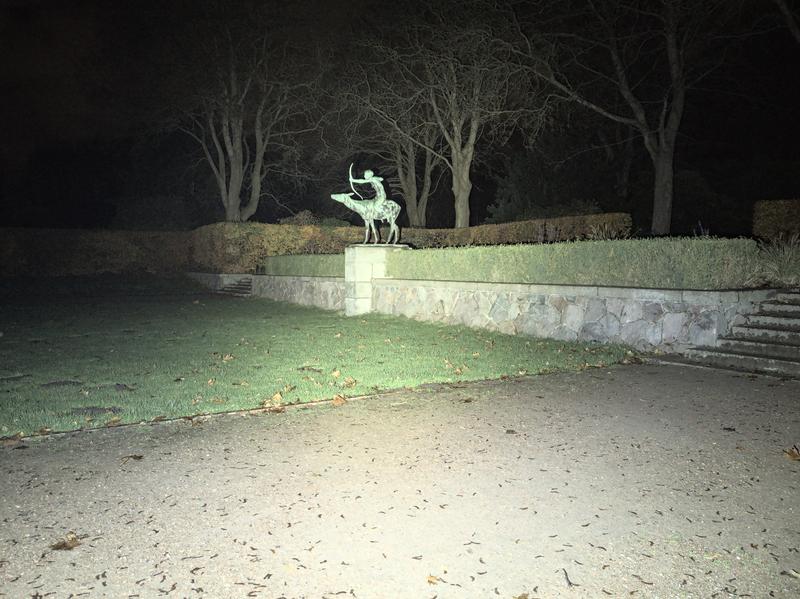 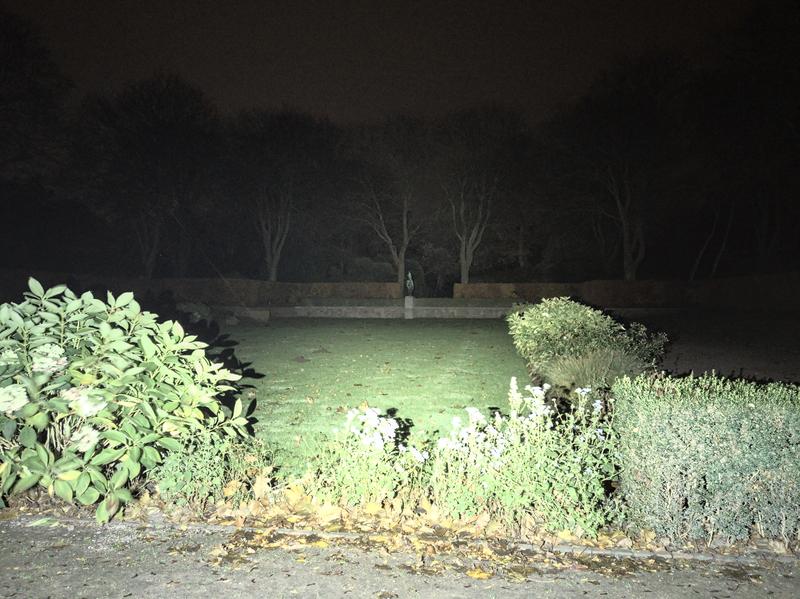 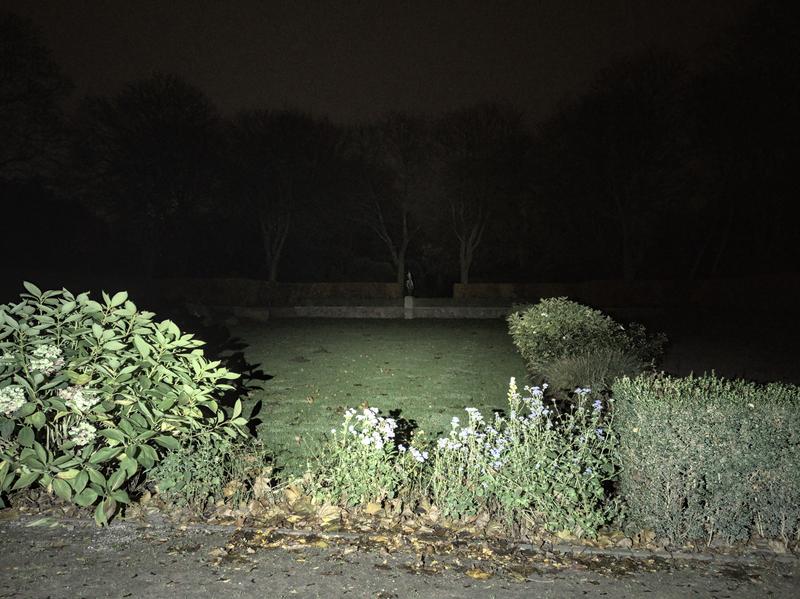 For comparison, the Thrunite TC20 NW 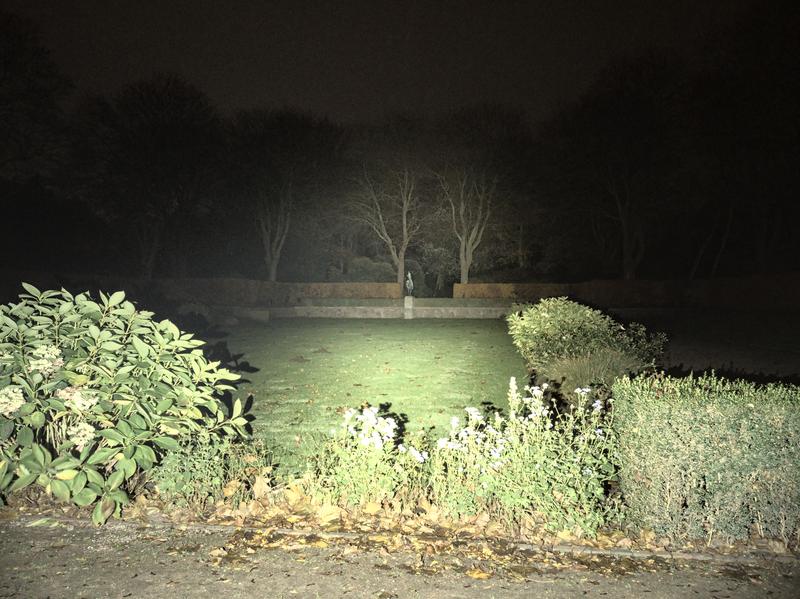 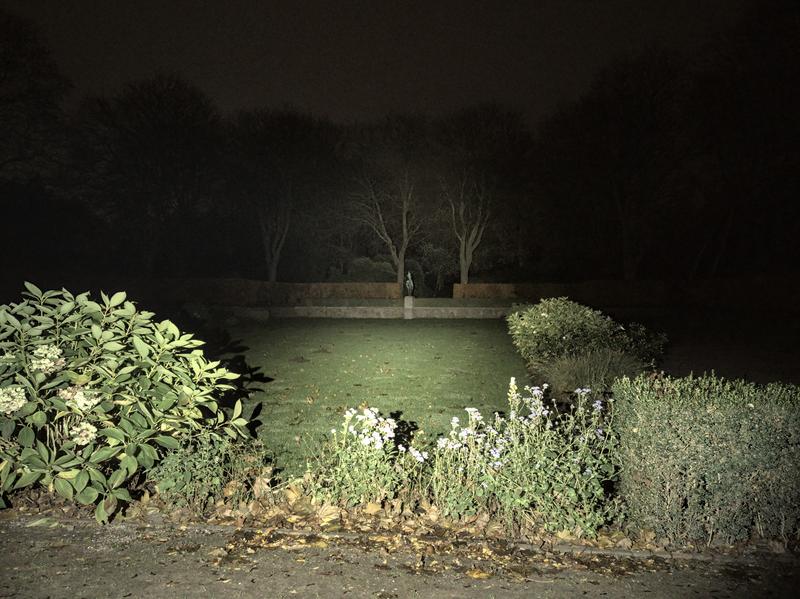 The build quality of the T2 is typical of Thrunite, which is to say there are no problems. There was no sign of water ingress after a brief immersion. The threads are smooth. The battery tube is anodized on the head side, but not the tail size, which is more convenient ergonomically for lockout.

The T2 improves on previous Thrunites by having a raised area around the switch and the charging port, making it easier to find the switch by feel. I even found it possible while wearing lightweight gloves, but not with heavy gloves. Grip is sufficient with bare hands, but not ideal with thicker, lower-traction gloves. The pocket clip is effective with most pants, but a bit tight at the top.

The T2 includes a proprietary battery based on a 21700, but with an extra contact added. It does not use this extra contact; it was included to support the TT20 which requires it. Most 21700 batteries can be used, however unprotected flat-top batteries are shorter than Thrunite intended and lose contact easily unless used with a spacer (rare earth magnets are suitable spacers that stay in place reliably). Furthermore, some protected batteries are too wide. A Nitecore 4000 mAh protected cell I tested required me to remove the head and tailcap to push the battery out. 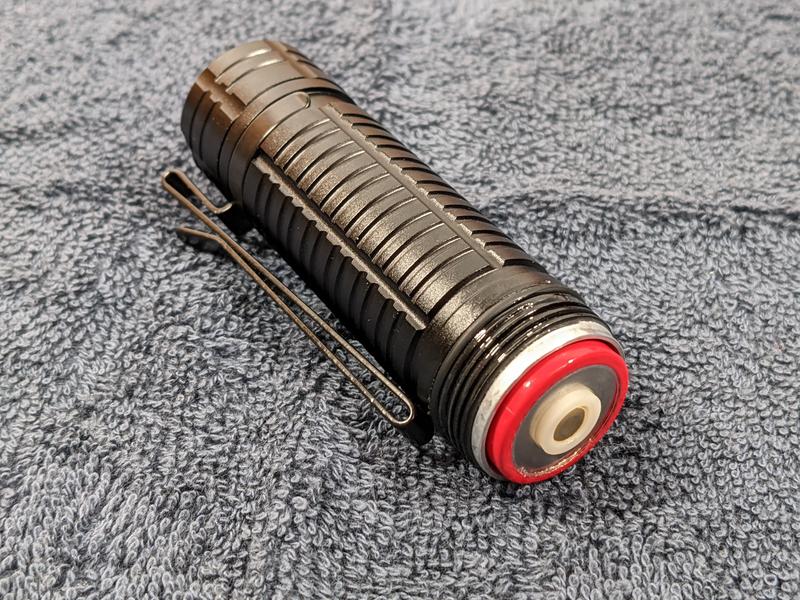 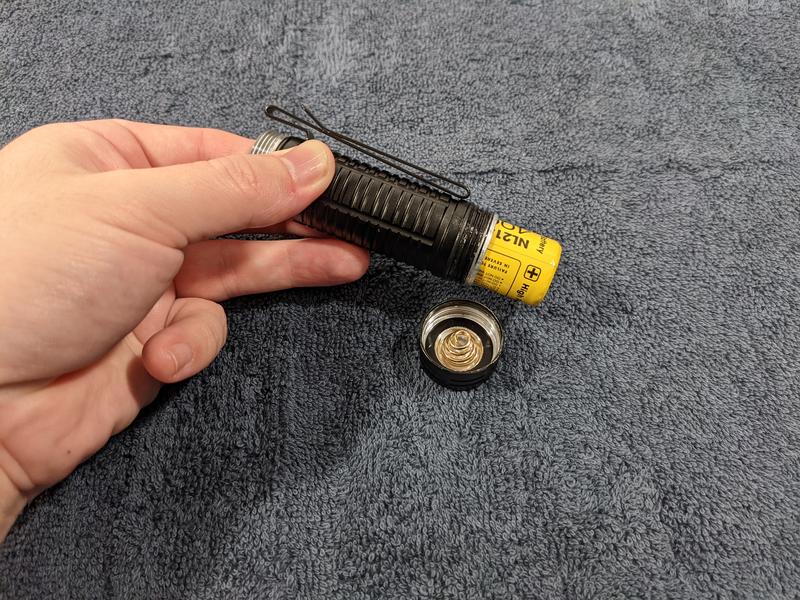 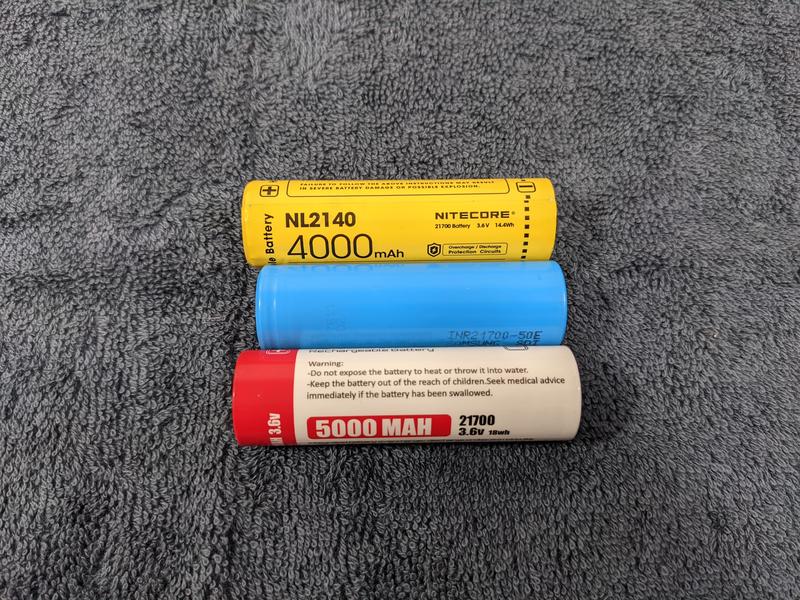 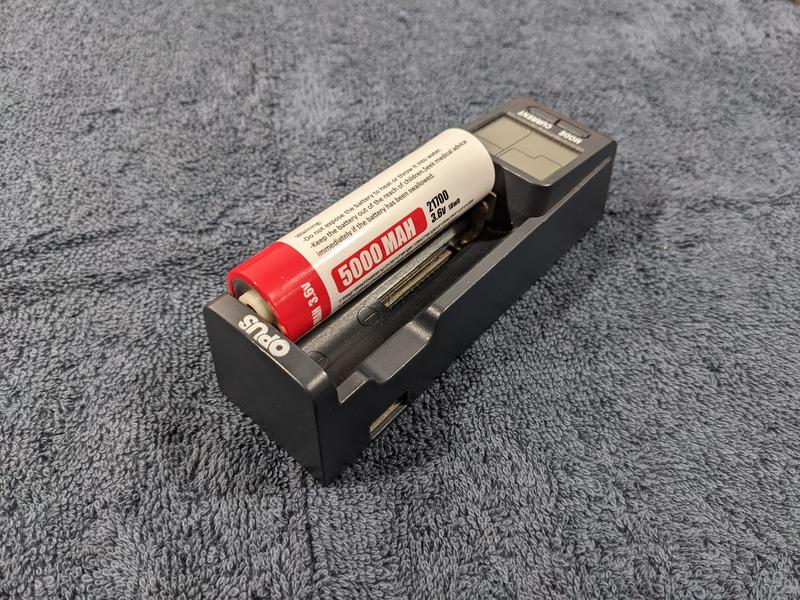 Charging is USB A-to-C only and takes about 4 hours for a full charge from a power supply that can deliver 3A. Unfortunately for the T2, USB-C-only power supplies are becoming m ore common, such as this one that came with my phone. 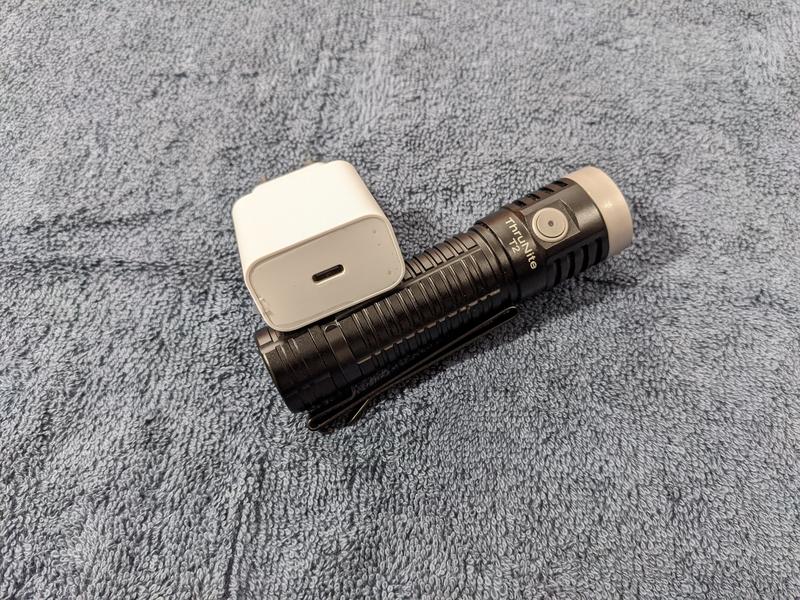 The T2's bezel is glued shut, but can be opened with a strap wrench and some determination. I was surprised to discover it's running at 12V, making the GT FC-40 a viable emitter swap, which was just confirmed to work in a post in the linked BLF thread. This emitter greatly increases the appeal of the T2 for me, and I have some on the way to try out.

Other variants of XHP70 would surely work well, and it's possible more exotic options such as an array of Nichia E21A wired for 12V. More exotic and likely viable is four 3V LEDs wired in a 4S configuration with a quad optic like the Carclo 1062x series.

It's likely possible to solder a spring to the brass button used as a positive contact and improve support for unprotected batteries.