This Skilhunt M150 v2 was providen by Skilhunt for review. Killzone Flashlights, a Skilhunt dealer for the US facillitated the arrangement. Here's the M150 at Killzone. Those are affiliate links to Killzone, and my affiliate coupon code "zakreviews" will get you 10% off.

For black friday weekend, code "BF30" takes 30% off Skilhunt products at Killzone. The M150 is also significantly discounted at Skilhunt's own website. 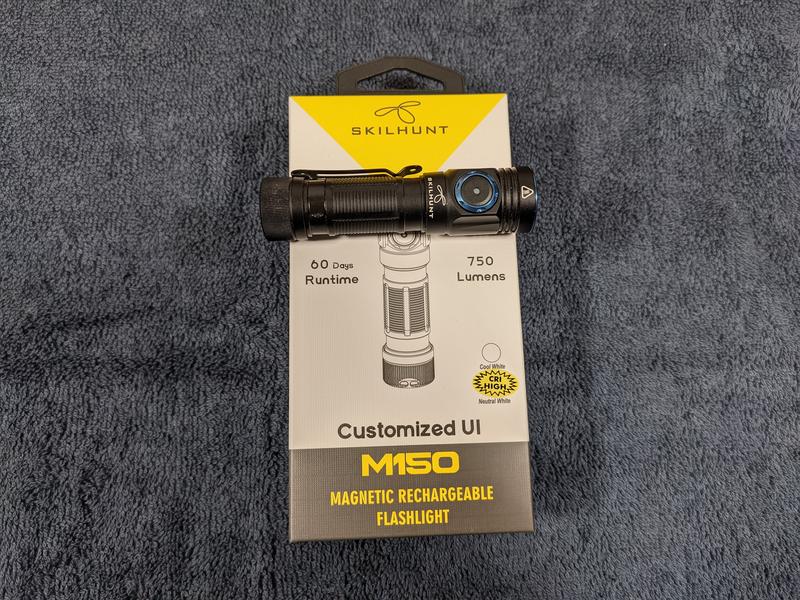 The M150 is a medium-small everday carry flashlight using a single AA battery, or a Li-ion rechargeable 14500 battery, which is included. It has USB-magnetic charging for the 14500, low-voltage protection for both battery types, and well-spaced modes for either. Output for the LH351D version is 666lm on 14500 and a respectable 220lm on AA. A number of competing lights do not support 14500 well, often losing their low modes and having poor regulation and mode spacing, and the risk of rapidly over-discharging unprotected 14500s. The M150 supports both battery types equally well, gaining output in higher modes as well as capacity with third-party 14500s holding about a Watt-hour more energy than the highest-capacity NiMH AAs. 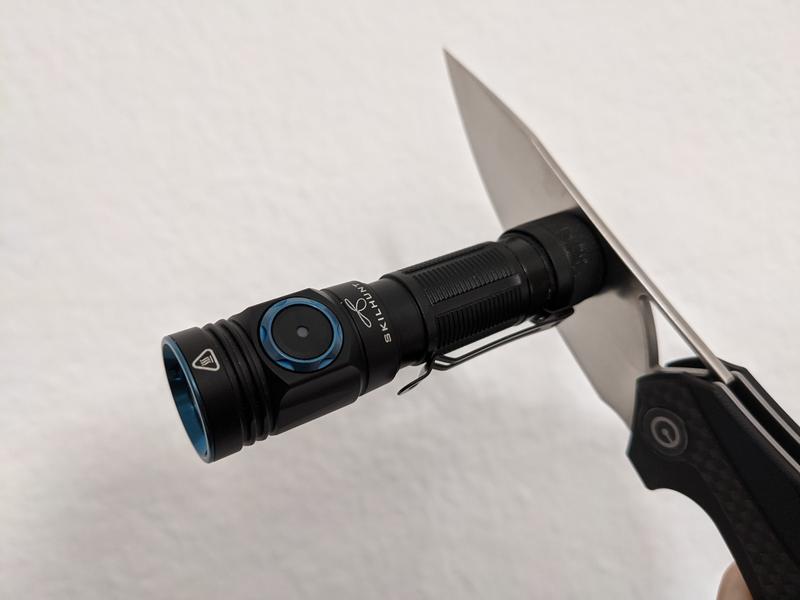 People don't traditionally cross-shop 1xAA and 1xCR123A lights especially often, as the CR123A previously offered higher performance, and many CR123A/16340 lights introduced in the past few years offer onboard charging. The latest 1000+ mAh 14500s match the capacity of a CR123A disposable under typical high-output flashlight loads, and exceed that of any 16340. Furthermore, the M150 matches the onboard charging of many of those lights while using a standard battery, unlike the proprietary battery found in the popular Olight S1R. 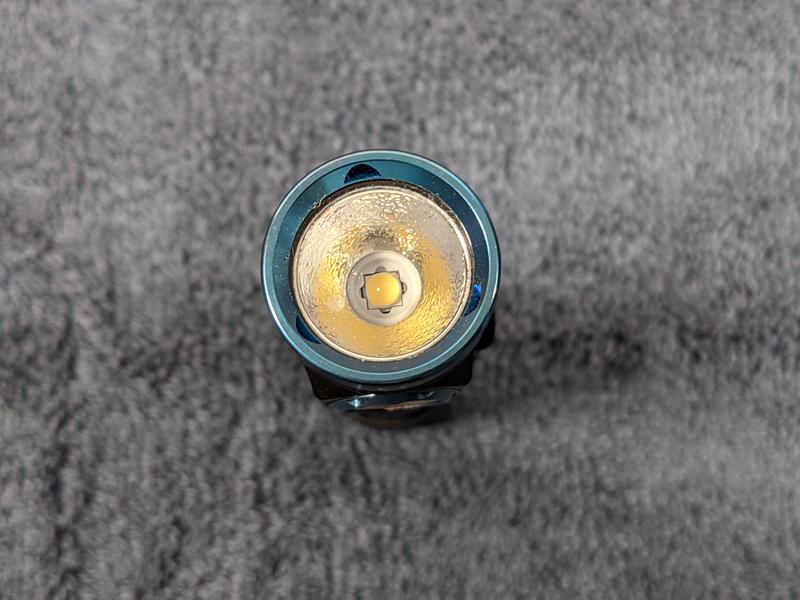 A criterion I've been applying to my subjective evaluation of any EDC light recently is how often I miss my Zebralight SC64c LE while carrying the light in question. That is, of course a considerably more expensive light with a larger battery. With the M150, it's very rare. I'd miss the larger 18650 battery if I needed high output for hours on end of course, but that's fairly rare for me in 2020, in part due to the pandemic. The only other issue that has made me wish I had my Zebralight instead of the M150 was an accidental activation, which the Zebralight's significantly more recessed switch would have prevented. In short, the M150 is absolutely an EDC favorite for me, and the light I reach for any time I want to carry something smaller than 18650.

The M150 offers a choice between a high-CRI neutral white Samsung LH351D, or low-CRI Cree XP-L2 in cool or neutral white. The older M150 v1 has a user interface with less configurability.

There are two different UIs: mode group A, and B. A resembles Skilhunt's older products, while B is similar to UIs used by Acebeam, Olight, and Thrunite, but with more modes, and user control over what modes are available. Skilhunt uses L, M, H, and T 2 and 1 to designate the modes, in order of lowest to highest. Blinking modes are designated S 1-3.

Note that while the lowest mode can be saved into memory, it is not saved when accessed using the shortcut from off.

Loosening the head or tailcap a quarter turn locks out activation mechanically.

In config, the light will cycle through all the modes other than T1. If enabled, the indicator light under the switch will be on, and if not, the light will be off. Click once to toggle the active mode. The cycle will continue until interrupted by either a long-press to save the current settings, or a triple-click to reset to factory defaults.

Advertised performance is with the low-CRI XP-L2 LED, which will have different performance characteristics from the high-CRI LH351D. They are included for reference, but slight reductions in output and throw are to be expected in exchange for the greatly improved color quality. Runtimes may also be slightly different due to forward voltage. I have omitted the percentage of claim columns I usually include for this reason. 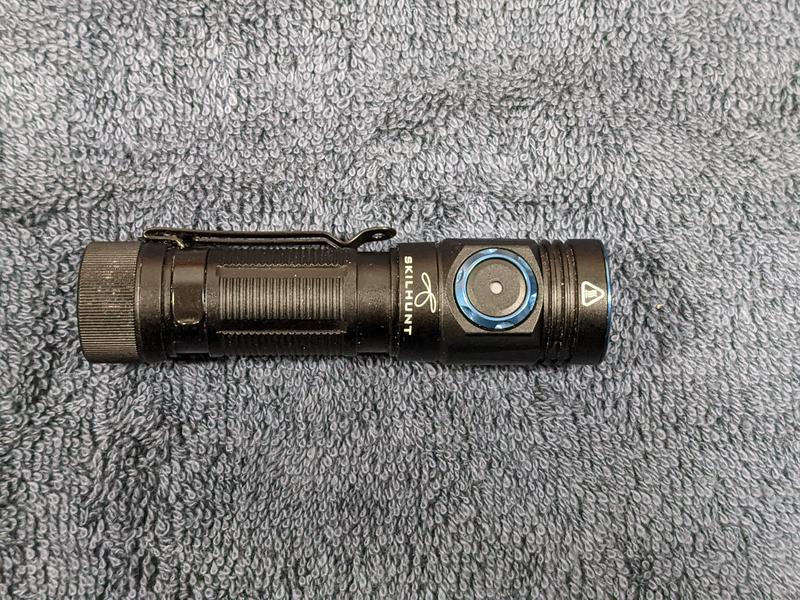 Both Turbo modes have a timed stepdown to H1 for thermal reasons. It's 1 minute for T1 and 3 minutes for T2.

Advertised performance is with an unspecified 2450 mAh rechargeable AA battery. Testing was performed with a Panasonic Eneloop 1900 mAh AA battery unless otherwise noted. Runtimes should be shorter than advertised.

The M150's beam is typical of a high-CRI LH351D in 5000K, which is to say sunlight-like on high and a little greenish on low, with minimal shift across the beam. Colors are visually vivid and accurate compared to other LEDs.

The M150 has no PWM flicker or detectable ripple on any mode. 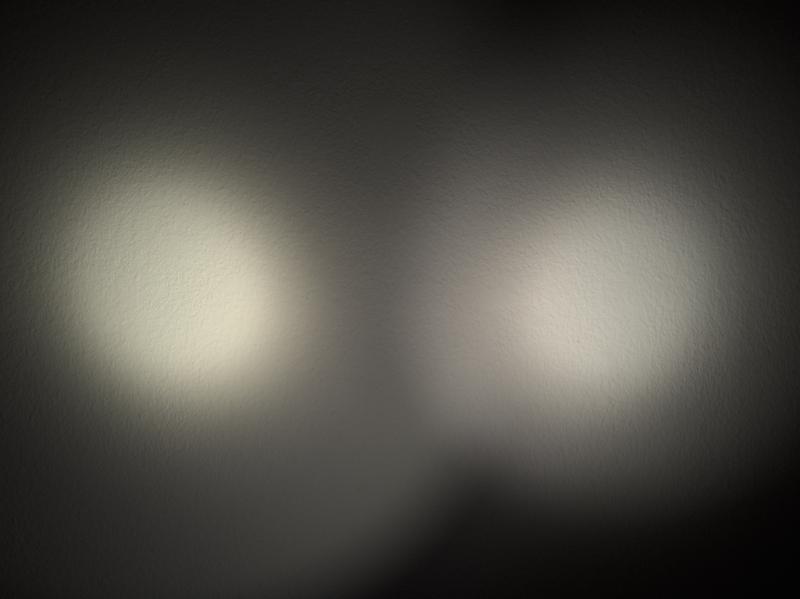 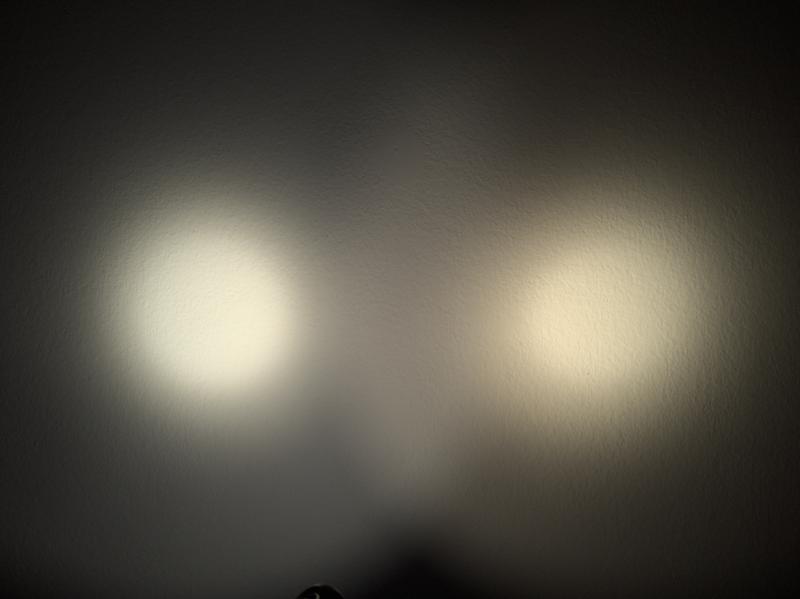 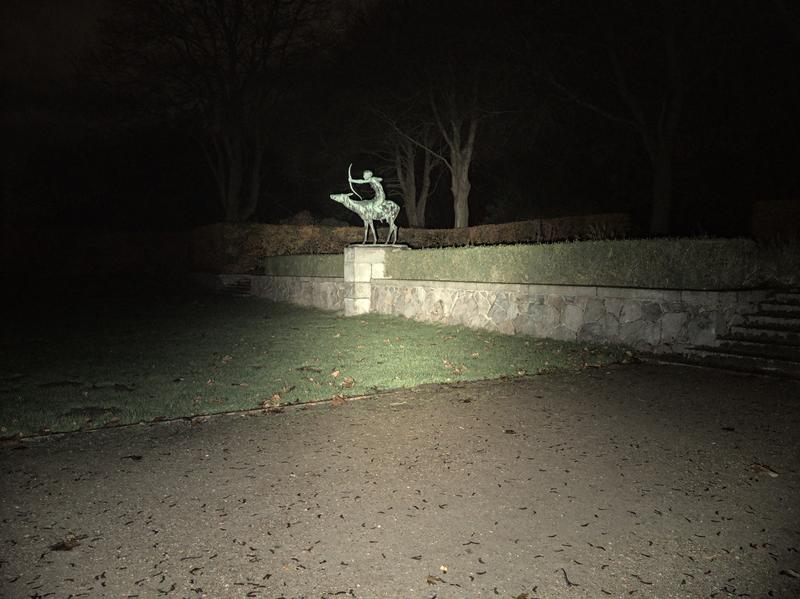 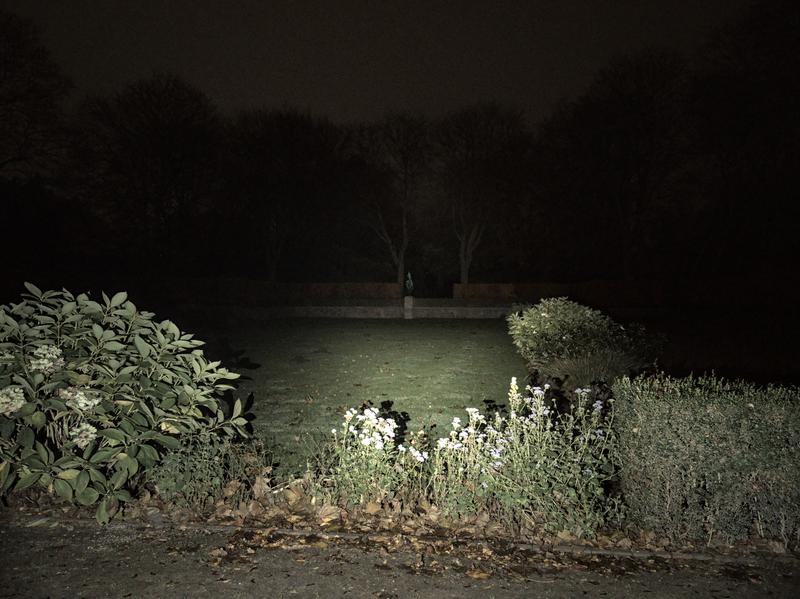 The M150 shows no issues in its construction with good fit and reasonable tolerances. It survives immersion in water with no signs of ingress. The threads work reliably, but aren't as smooth as some of its competition. 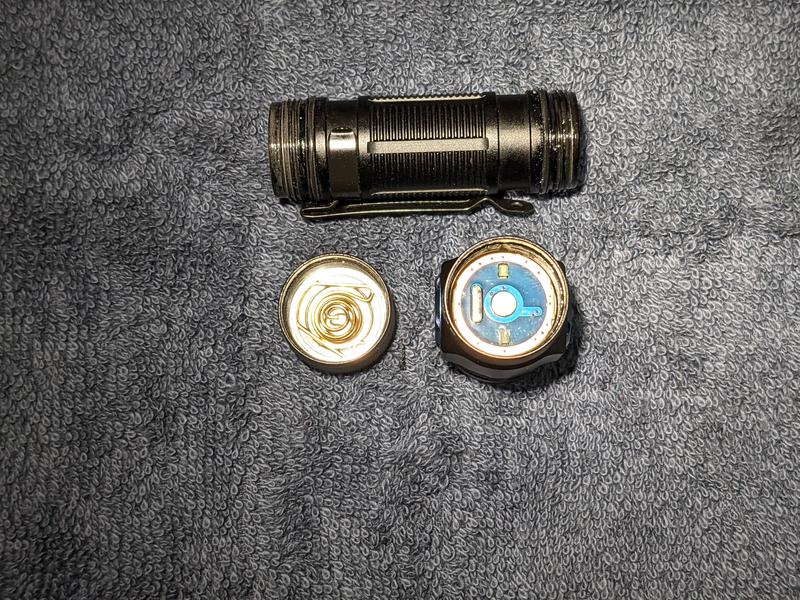 The magnet in the tailcap is removable, but unlike 18650 Skilhunts, the M150 does not include a rubber spacer to replace it. 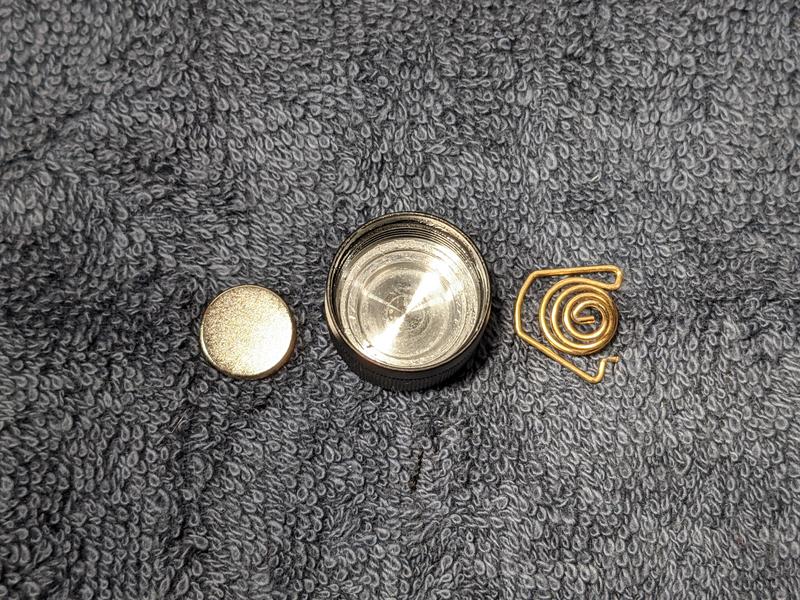 The M150 is a slim light that's comfortable in the hand and pocket. The charging pad and switch are both raised relative to the rest of the body and easy to find by feel, even with gloves on. It's not necessarily easy to tell the switch and charging pad apart, but squeezing the two between thumb and forefinger reliably actuates the switch. The switch is recessed slightly below its bezel such that contact with a flat surface cannot press it, but actuation force is light and a soft or protruding surface can activate it fairly easily. This has only happened to me once, but I've read complaints from others.

The texturing on the body provides reliable grip. The pocket clip holds the light securely in the pocket and allows easy insertion and removal. It does not, however allow thicker pocket material into the loopover area, making it carry a little shallower than it appears in some pants. 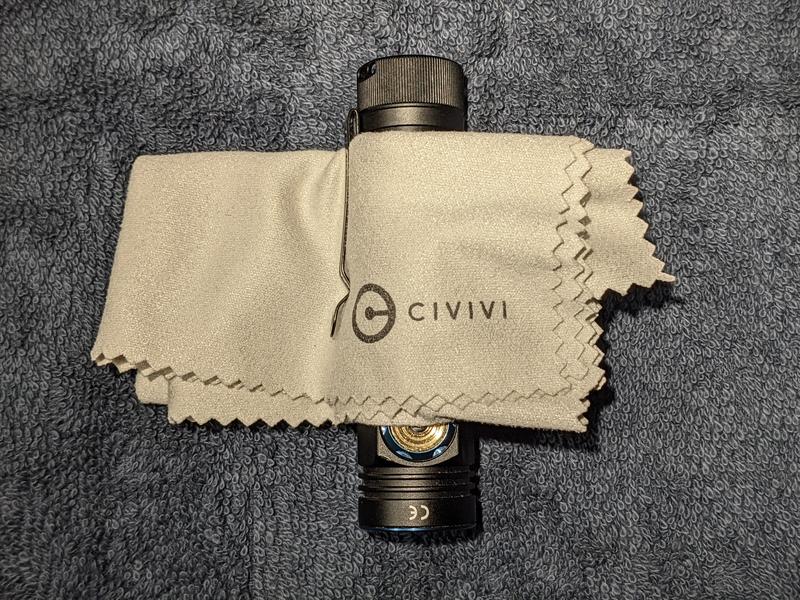 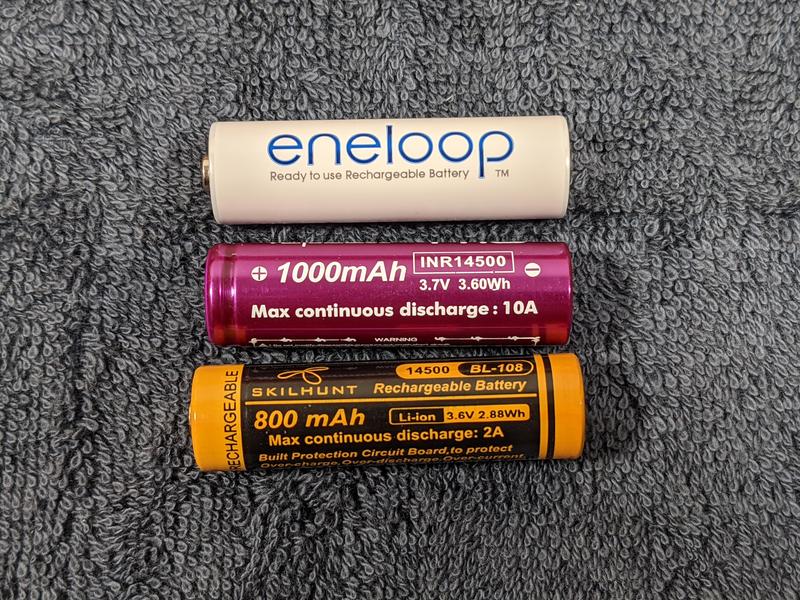 Using the included 14500 to power a slot powerbank to charge a third-party 14500 in the light as seen here is one of the worst ways I can think of to manage portable energy. 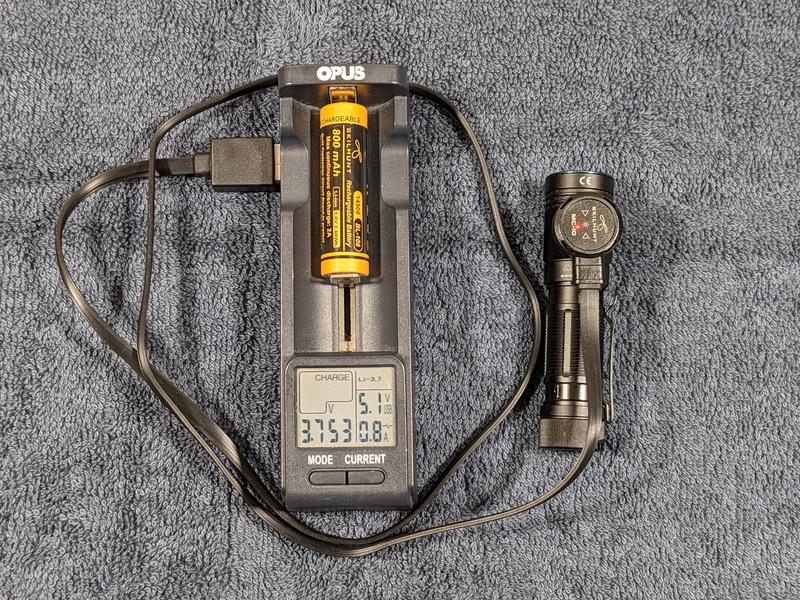 The M150 can run from USB power in all modes without a battery installed or the body of the light attached. What is seen here is again, probably not the best way to use these components. 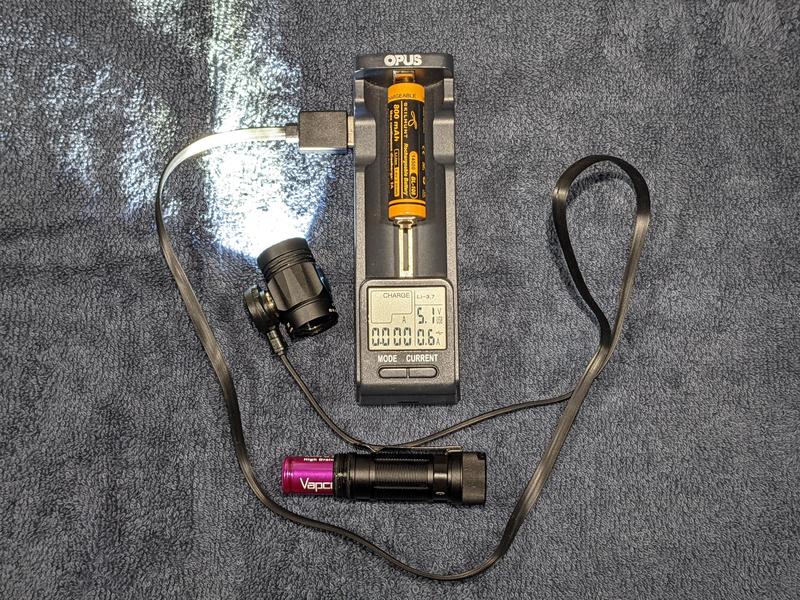 An LED or optic swap in the M150 would be easy, as the bezel simply unscrews with no fuss, glue, or prying. The rectangular MCPCB is the only odd bit, making reflowing another 3535 size LED the easist option. LEDs like the Nichia 219B and Luminus SST-20 would work well in the M150.