I didn't take as many pictures as I usually do for a review. Mine wouldn't have been as good as those in zeroair's review anyway. Note that it's exactly the same unit being reviewed in both. 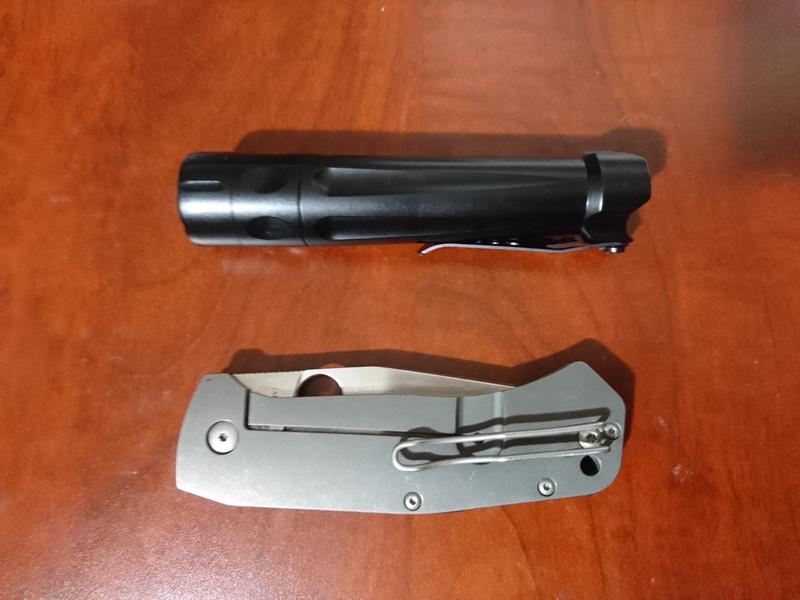 The BOSS (Big Output Small Size) is a luxury EDC flashlight based on the Lux-RC 371D integrated light engine and a custom host built by Oveready. It's meant to be an ultra-high-output light, with its claimed output of 3498 lumens in the brightest configuration exceeding what's typical of hobbyist-built direct-drive triples using the same emitters. When the BOSS was first released, it would have been hard to find a factory EDC light claiming more output, as the Emisar D4 was not yet available. The price is $409 for the 18650-length aluminum version, making it the most expensive flashlight I've ever used.

I must admit I may not be the best at evaluating luxury product concepts, but I can say the concept here is subtle: a well-tailored suit rather than a huge gold chain, and I like that. There are 18650/2x18350 (BOSS 70) and 1x18350 (BOSS 35) bodies available separately.

The BOSS is a triple-emitter light with a choice of Cree XP-L HI (~70 CRI) in 5700K, 4000K, 3000K or Nichia 219C (90+ CRI) in 4000K. There's a secondary emitter in a choice of red or amber. It uses the popular Carclo 10507 optic, so the beam pattern will be similar to many other EDC-size triples. Previously, "redomed" emitters where the original dome has been removed and replaced with something flatter have been available, and possibly some other options. This was a competitive emitter selection when the BOSS was released, but in 2019, it would be nice to see some of the more recent popular options like the Samsung LH351D and Luminus SST-20.

There's a glow in the dark O-ring in the head putting out a strong green glow after use. The switch is a McClicky from McGizmo. The body has an unusual shape, tapering gradually from the head to the tail, then flaring outward abruptly just before the tail. This shape provides excellent retention in the hand despite a smooth surface. This BOSS is satin-anodized aluminum, but several other materials are available including copper, titanium, and zirconium.

The driver has some uncommon features, including a unique optical programming system. A web application on the Lux-RC site allows customizing the set of modes (up to 4), low-voltage protection, mode memory, timed rampdown ("battery stretch") and "bounce" sensor to shut off the light if an object comes too close to the lens. The UI is a blink-to-change-mode design typical of mechanical switch lights. As the switch is a forward-clicky with half-press for momentary, it's easy to set the mode when first turning on the light, and less easy to change modes later.

I hereby retract every review I've written in which I said anything else was "well-machined". The construction of this host is amazingly precise. The threads are amazingly smooth. The anodizing is thick and smooth in a way that's hard to describe. I should note the longer body included with this light was actually a QC reject given to zeroair for testing purposes, but I couldn't find anything wrong with it. The machining standards must be very high indeed. The ergonomics, at least with the longer body, are perfect. The clip slides into the pocket easily, but has very strong retention. Everything about the host just feels well-done. It's quite compact as well for a light with a mechanical tailswitch.

I'll repeat that I probably don't have the right mentality to evaluate luxury products. The decision to buy a $400 EDC flashlight is going to be based primarily on aesthetic and emotional motivations, and my review style focuses primarily on functional use as an illumination tool. In that role, the BOSS is fine, but doesn't really stand out and falls well short of what it promises. As a luxury product... if it makes you happier than $400 does, I certainly won't try to talk you out of it.

The BOSS comes in any combination of 18650/2x18350 or 1x18350, XP-L HI (neutral or warm) or 219C (neutral) and a choice of materials. Currently offered are satin black aluminum, brass, copper, and titanium. Raw aluminum and zirconium have been offered, and there have been other emitter options.

The BOSS does not include any accessories, but some are available for purchase, including a disassembly tool and a cap to use a spare body as perhaps the world's most expensive battery carrier.

The usual UI table doesn't work well here. The BOSS uses a mechanical forward-clicky switch, where a half press supplies power momentarily and a full press locks it on. Briefly interrupting power advances to the next mode in the cycle. In practice, one accesses the desired mode form off by a series of half-presses followed by a full press. Changing modes while on requires switching the light off.

The modes are chosen using the Lux-RC optical programming website. There can be one to four modes, and those modes may consist of:

Additionally, the following may be configuired:

There are additional options intended to be set by the flashlight vendor. I did not explore trying to override them. They are:

Where a graph is present, efficiency and runtime numbers are derived from the graph. Where absent, they are estimated from power consumption measured with a full, or near-full battery and do not account for the effect of battery voltage on driver efficiency.

By way of comparison, I measured 54 lm/W from my Astrolux S41/219B in its 1010 lumen mode (one down from max). The S41 has an extra emitter, but 219Bs are known for beauty, not efficiency, and FET drivers are quite inefficient. The Lumintop FW3A, having the same number and type of emitters as this BOSS measured 81 lm/W in its max-regulated (~800lm) mode.

This BOSS is an XP-L HI triple with a Carclo 10507 optic. The beam is the same as others with the same emitters and optic: stronger in the center, but no real hotspot, or alternately a giant hotspot with no real spill. There are mild artifacts. The tint is great on a white wall: 4000K and slightly rosy with no significant tint shift or off-colors. I was very aware of the low-ish CRI outdoors, but a high-CRI emitter option is offered.

The machining of the BOSS is spectacular - the best I've seen in a flashlight. Everything fits perfectly and looks amazing. The threads are silky smooth. I'm running out of superlatives.

I don't see a waterproofing claim on the product page. I did not perform an immersion test, as this light is very expensive and not mine. I do expect it's waterproof.

The BOSS ergonomics are very good. The taper of the light from the head to just before the flared tail lock the light into the hand without the need for rough textures. The ramp and tension of the pocket clip are great. The flared base allows a cigar grip.

This BOSS was modified with tritium vials in the optic legs and a glow in the dark switch boot. As emitters are integral on the driver, emitter swaps without changing the driver are very difficult, though the entire driver package is available for purchase. Optic swaps are easy, and Oveready sells a tool to make removing the bezel without marring it easier.