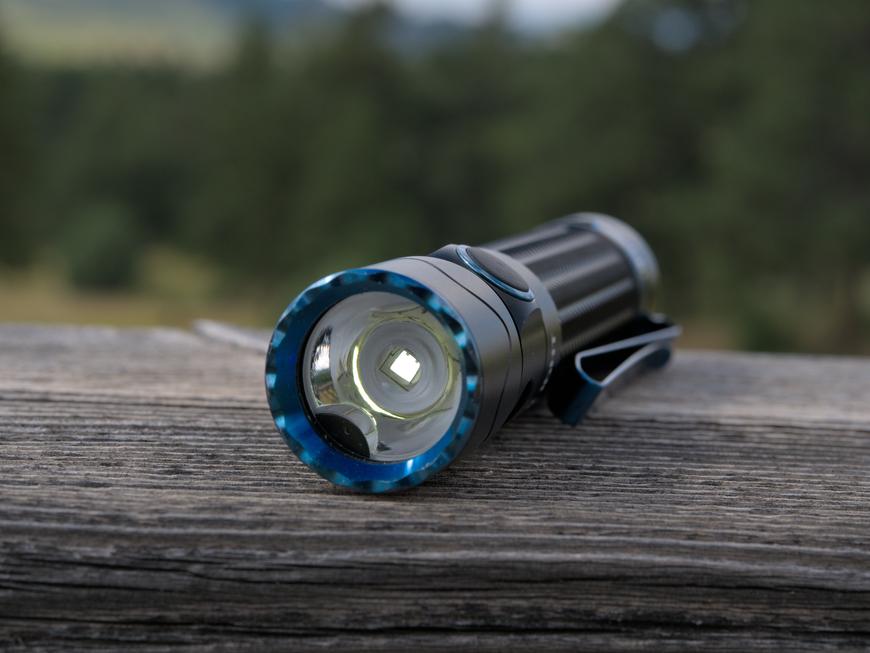 This Olight Warrior Mini 2 was provided by Olight for review. Olight is having a sale in their official store from 8PM EDT on August 30 to 11:59 PM August 31.

Those are affiliate links, and my affiliate discount code "Zak" is good for 10% off most products from Olight.

The Olight Warrior Mini 2 is a medium-large everyday carry flashlight with user interface features to support use in high-stress situations, with a cool white emitter and a proprietary battery based on an 18650 cell. The regular price is $90, though Olight has frequent sales.

A common request from beginners seeking flashlight recommendations when they anticipate using the light under stress is a single-mode, high-only flashlight. Such users often want a light for use when someone attacks them, or more likely when their dog slips its collar and bolts into traffic. Memory for technical details and fine-motor control aren't at their best in such situations, so they tend to want simple operation with a button on the end that will give maximum output with a firm press. To enthusiasts, such a design seems like a waste of the potential provided by modern batteries, LEDs, and electronics. 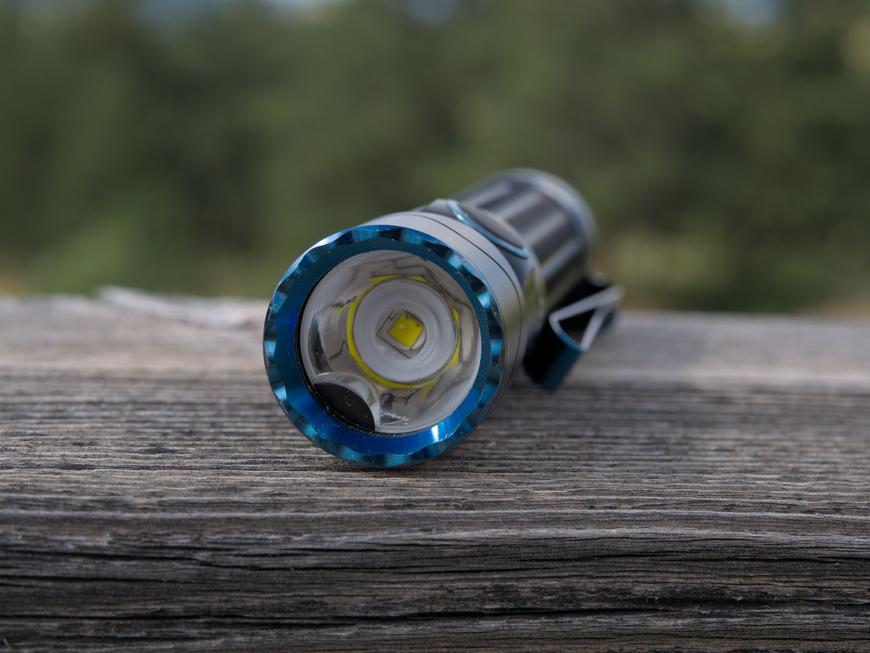 Several flashlight manufacturers have designed user interfaces that provide maximum output with a firm press of the tailswitch while offering access to other modes by other means. Olight's may be the most sophisticated, with a half-press on the tailswitch activating medium, and a time-based means of deciding between momentary and steady activation. It's also possible to set the tailswitch to high/strobe instead of medium/high.

Unfortunately, color quality was not a priority in the Warrior Mini 2, and the LED chosen, a Luminus SST-40 has some of the worst color rendering of any used today in a premium flashlight. Worse, for some users is that the battery is proprietary, with both positive and negative contacts on one end. Unlike some other Olight designs, the extra contact is not just used for charging, but is required to operate the light. An 18650 will not power the light at all. This makes sharing spares with other lights and devices that use 18650s impossible, and buying extra batteries considerably more expensive than competitive options.

The Warrior Mini is a dual-switch flashlight slightly more compact than the average 1x18650 dual-switch tube light. It slightly resembles an Olight S2R with an added tailswitch, though less so than its predecessor, which is closer to the S2R's size. The body is textured with a comfortable, but grippy pattern. The pocket clip is both two-way and reversible, and provides essentially flush carry in the bezel-down orientation. New for an Olight using a TIR optic is glass lens. A proximity sensor reduces the chance of burning objects, a design Olight has used on headlamps from the H15 Wave to the Perun series. 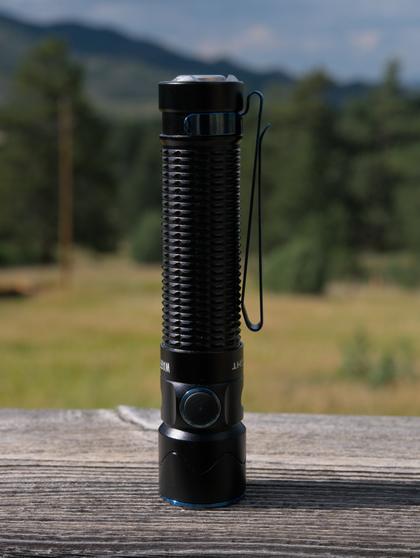 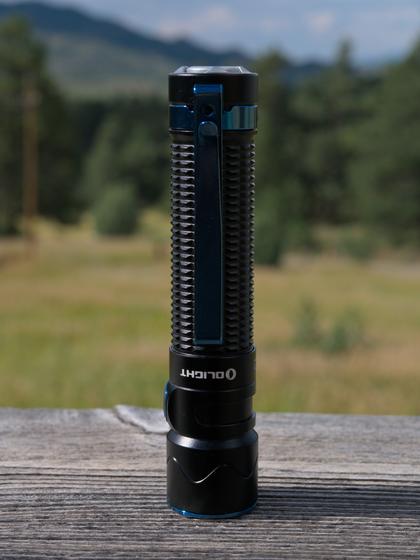 The user interface is fundamentally similar to products from competitors such as Acebeam, Klarus, and Thrunite in that a sideswitch provides access to all modes for general use, while a tailswitch offers instant access to the highest mode. Where this light, and several other Warrior series models differ from those is that a half press of the tailswitch activates medium. A similar "gas pedal" design is found on some Surefire models, but without the extra modes on the sideswitch. Competitors are typically half-press for momentary and full-press for constant on, while Olight opted for very short presses activating constant output and anything over about half a second being momentary. This method isn't good for signaling, but I do find it convenient for general use. Unusually, there's no mechanical lockout, and partially unscrewing the head only disables the tailswitch. An electronic lockout is available. 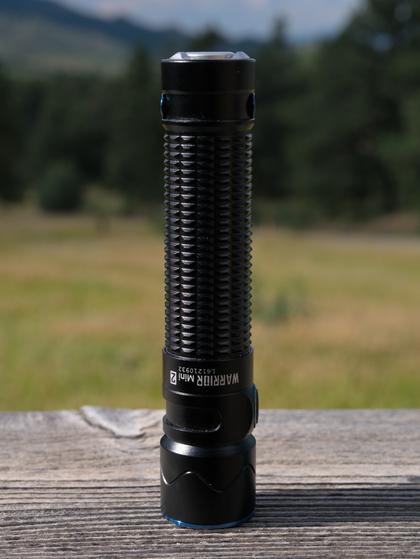 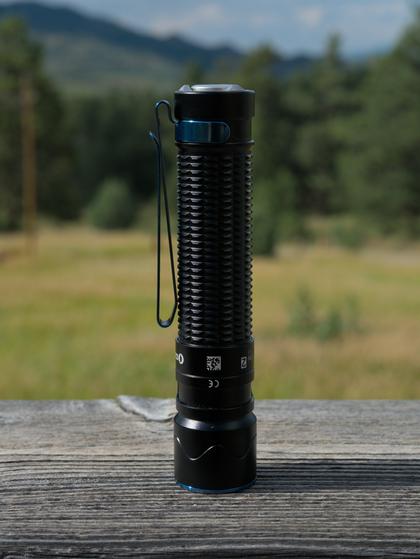 There's a magnet in the tail of the light, and it can support the weight of the light when hung vertically, but not horizontally. The LED is a cool white Luminus SST-40. This emitter has been popular of late with manufacturers because it's efficient, capable of outputs over 2000 lumens when driven hard enough, and easier to drive than multi-die LEDs like the Cree XHP series. The SST-40 is not popular with color quality enthusiasts however, as its color rendering index is typically under 70, while high-power LEDs in the 90s are available. Several Luminus emitters tend to have green tint, especially in lower modes, an this SST-40 is no exception. It's less green at higher outputs, but colors of objects are significantly washed out.

Olight opted for its usual magnetic charging system and proprietary battery for the Warrior Mini 2. Magnetic charging is a mixed bag - convenient and waterproof, but proprietary. Proprietary batteries, on the other hand are always bad for the user unless there's some benefit that couldn't be achieved any other way. Other manufacturers who want an electronic tailswitch and onboard charging usually use a double-wall battery tube, and Olight did so in the past with the original M2R. Proprietary batteries may be good for the manufacturer though, as Olight charges about double the market price of a protected 18650, and four times the price of an equivalent unprotected cell. 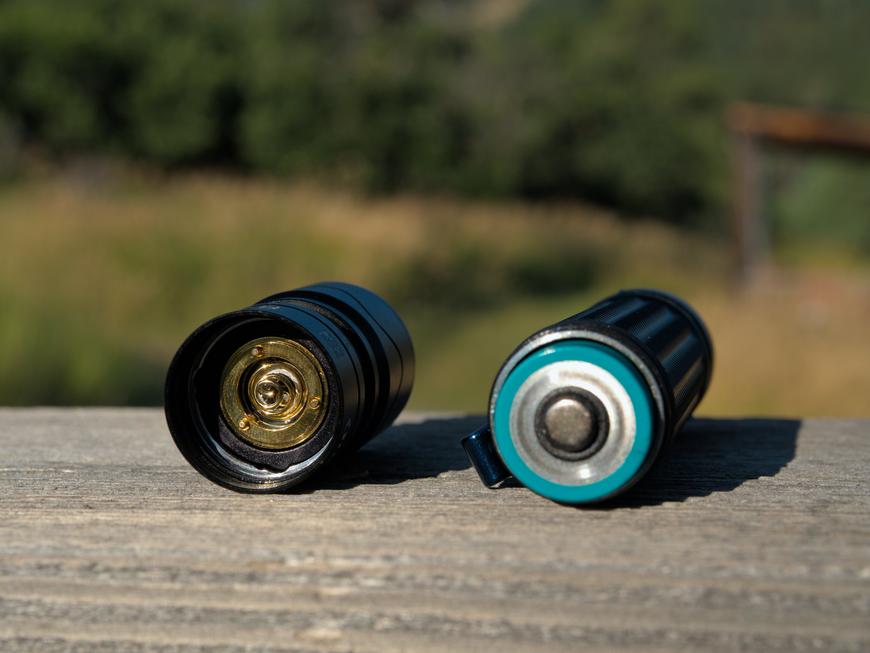 Most aspects of the Warrior Mini 2 are very well executed. Machining quality appears to be excellent, and the threads are noticeably smoother than the average flashlight. All modes are flicker-free, and all but the highest have stable output until the battery is low. Efficiency is excellent in all modes I tested, though it was not practical to test current in low modes or quiescent current.

I've noticed two execution issues. First, the magnet is not strong enough to hold the light at angles far from vertical. Second, during some attempts to test runtime at max output starting with a full battery, I only measured 1106 lumens at 30 seconds rather than the 1823 I measured in other runs. The light did come on at full power, but throttled rapidly. I've seen similar behavior on some especially power-hungry lights to protect the user from damaging low-performing batteries, but that's surprising to see in a light with a proprietary battery.

There's a dedicated safety section here because the original Warrior Mini was quickly taken out of production after reports of accidental activation, burned clothing and bags, and melted optics. Activations were attributed to inadvertent tailswitch presses, and contact with objects that are conductive, but high in resistance. I personally verified that a high-resistance short across the tailcap of a Warrior Mini would turn the light on in its highest mode. I suspect this is how the magnetic remote switch for weapon-mounted Olight models works, but I don't believe the Warrior Mini is intended for weapon mounting.

The Warrior Mini 2 addresses the safety concerns in several ways. First, there's a proximity sensor that detects light bouncing back from a nearby surface and reduces output. This seems to be reliable and should prevent even intentional burning/melting of objects. Second, the button is harder to press, which I find a bit worse ergonomically. Third, the pocket clip now supports a bezel-down configuration, which I consider a huge ergonomic improvement. Fourth, there's now a glass lens over the plastic optic. Finally, shorting the tailswitch no longer activates the light. The only feature that comes to mind for me that Olight didn't add is a mechanical lockout.

I'm disappointed Olight made such a mistake with the original version, especially given previous issues with live charging contacts on other models, but I'm impressed with how thoroughly the issues were addressed on the new model. Any inadvertent activation with the new model is likely user error.

The Warrior Mini 2 comes in black or tan in aluminum as well as a "mountain sky" white/blue finish. There have been special editions in titanium, but titanium models are not in stock at the time of this writing.

This is the black aluminum version. 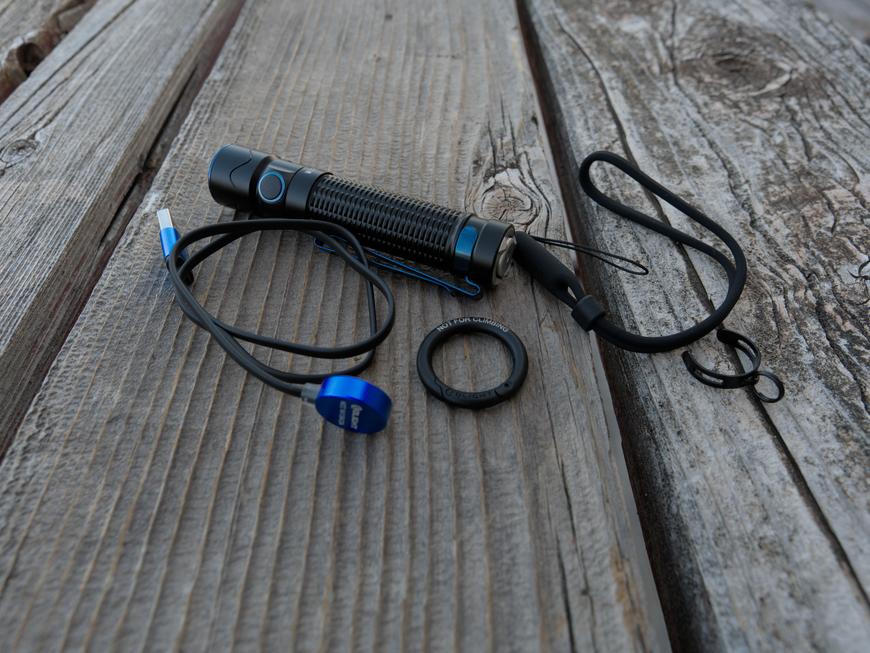 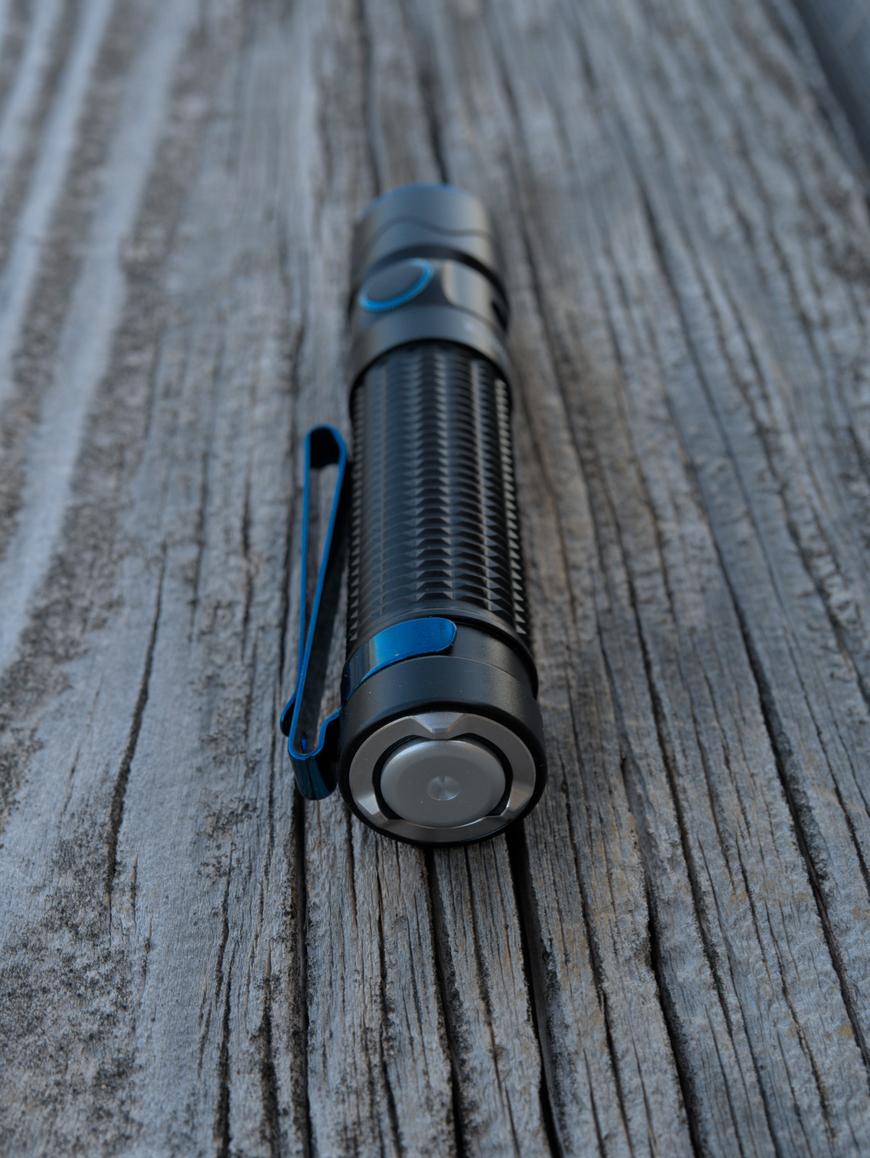 Normal behavior of mode 1 is to throttle to mode 2 over the course of 4 minutes, after which the graph should look like mode 2. I was unable to determine the cause of the throttling, and did not have the opportunity to repeat the test by publication time.

A Duv greater than +/- 0.006 is not ANSI white, and these CRI numbers are significantly worse than in typical of cool white LEDs with unspecified CRI. Colors are noticeably more distorted with the Warrior Mini 2 than with the average LED flashlight. 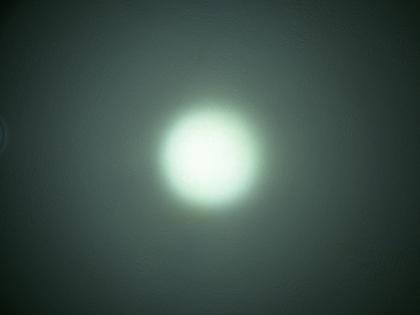 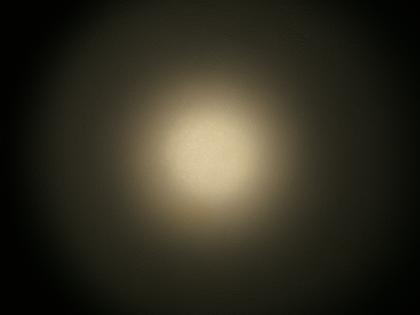 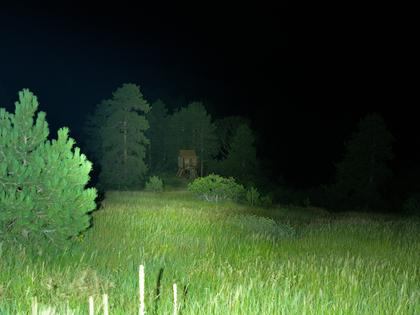 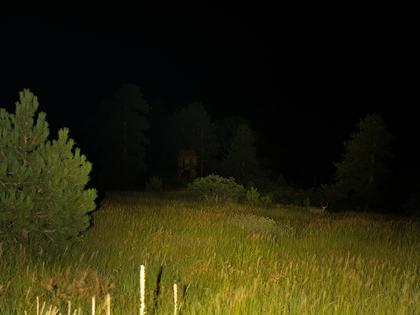 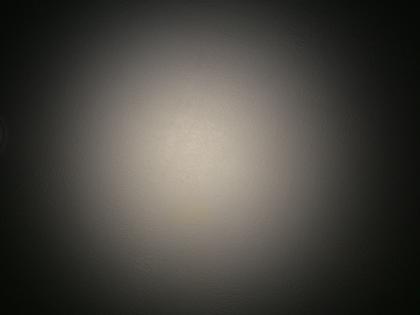 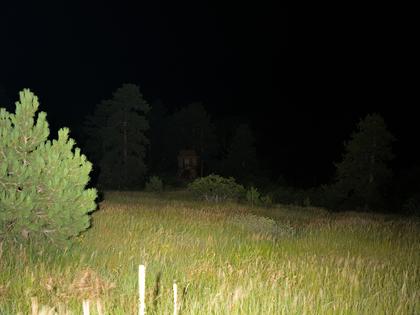 With both in their highest modes (shown), the Warrior Mini 2 is considerably brighter than the SC64c LE, however the sustainable levels are very similar.

The Warrior Mini 2 uses a proprietary battery derived from a 3500 mAh 18650 cell. Only this battery or substantially similar designs will work. It can be charged in most standard slot chargers, or internally using the magnetic charger. The latter takes about 4 hours. 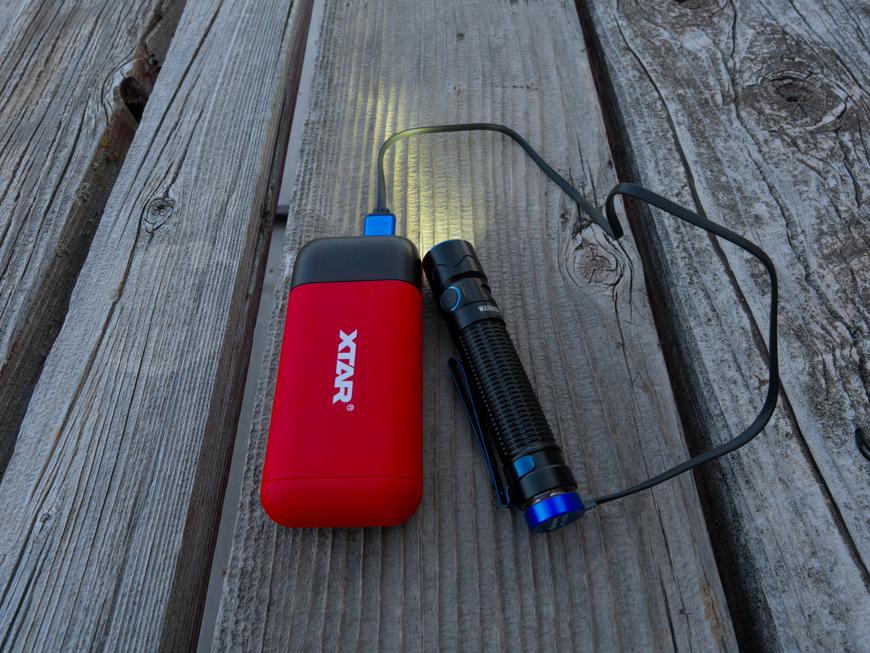 Unlike most recent Olight models, the Warrior Mini 2 uses a screw-in bezel, which makes removing the optic and MCPCB relatively easy. The MCPCB is an odd shape to accommodate the proximity sensor, slightly thicker than average, and has two holes to help position the optics. Both positive and negative contacts are on the same side, and the leads are too short to reach with some other MCPCBs. Reflowing a 5050 form factor LED such as a Cree XM-L2 or XHP50.2 (3V) onto the stock MCPCB is the easiest approach to changing the emitter. It should also be possible to use 3535 LEDs such as the Samsung LH351D and Cree XP-L series with more effort. It may be possible to use a reflector instead of the stock TIR optic, at a cost of disabling the proximity sensor. 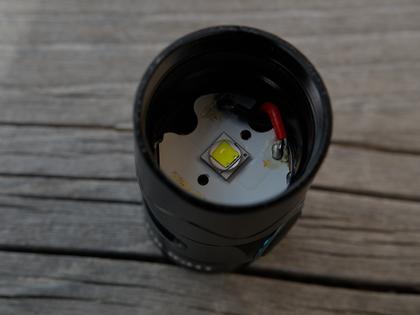 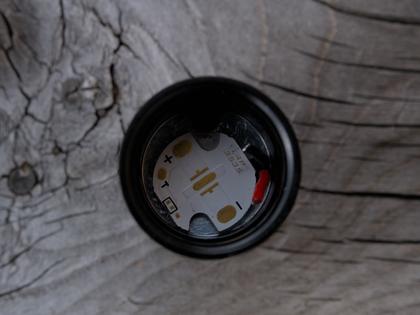