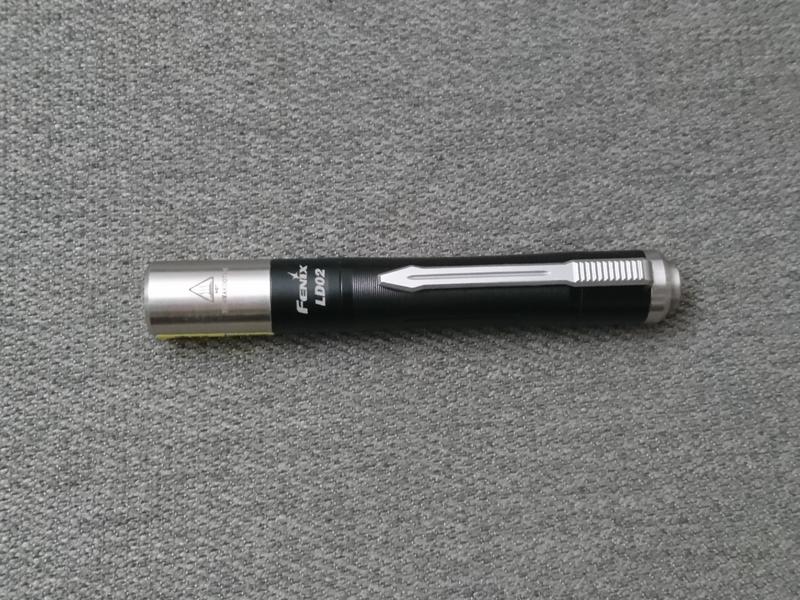 This Fenix LD02 v2.0 was provided by BestLight for review. Use coupon code "reddit" for a 10% discount.

The Fenix LD02 v2.0 is one of a very small number of 1xAAA lights with a tailswitch. To that, it adds a high-CRI, warm-white emitter and UV secondary. I believe this feature set to be unique at the time of this writing.

I'm fond of 1xAAA lights with tailswitches. It's a convenient form factor for a lightweight everyday carry, and more convenient for one-handed operation than the twisty switches more common in this size. The warm-white, high-CRI emitter is suited to people who miss the look of incandescents but want modern LED performance. I'd like to see more lights like this on the market.

Including UV is a bit odd. Perhaps Fenix intends the light to be suited for inspecting currency and documents with security features, where the combination of high CRI and UV would be of use. For the average user, the inclusion of UV will probably just get in the way. That aside, a 1xAAA light with high CRI and a tailswitch is a very good EDC option for a lot of users. 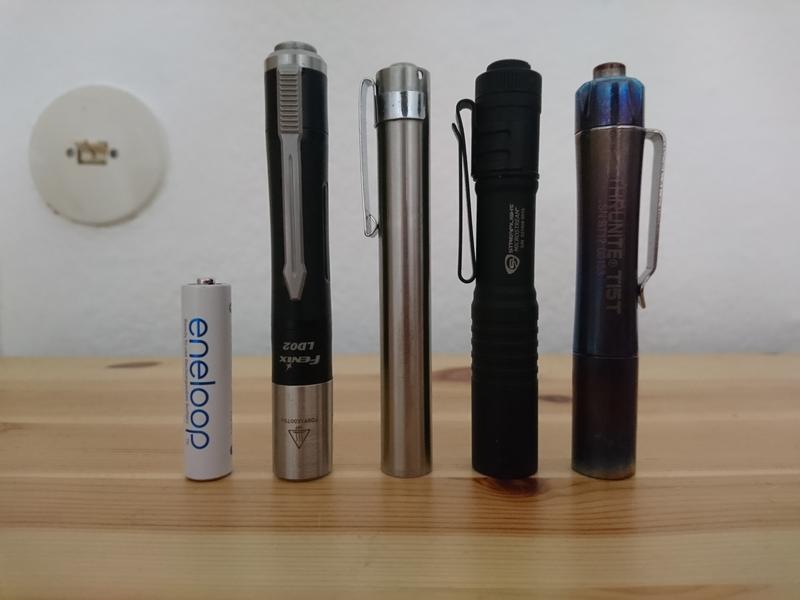 The LD02 v2.0 uses a combination of stainless steel and aluminum with a milled stainless steel pocket clip to house its emitters and TIR optic. The emitter is one I've never seen in a flashlight before: the Cree XQ-E HI. It's similar in size, configuration, and performance to the Nichia E17A. An E17A might have been a better choice here, as the LD02 has some unevenness in color noticeable on a white wall, and the tint is a little green. It's not so noticeable outdoors, and the color rendering is quite good.

The plastic TIR optic is exposed, without a glass lens, increasing the risk of scratches. This particular TIR optic produces a very large hotspot, but not much spill, which is a bit surprising given the naturally throwy emitter. A reflector might have been a better fit here, though the cutout needed for the UV emitter would create issues of its own.

The body has a considerable amount of effort put into its design, with significant use of stainless steel. The milled pocket clip is a particularly unusual touch to see in a light under $50. It's fixed in position, not intended to be removable, and very secure. It isn't ideal with very thick clothing, but seems appropriate to the lighter-duty use likely with such a small light. The tailswitch is flat and allows tailstanding on a hard, flat surface. 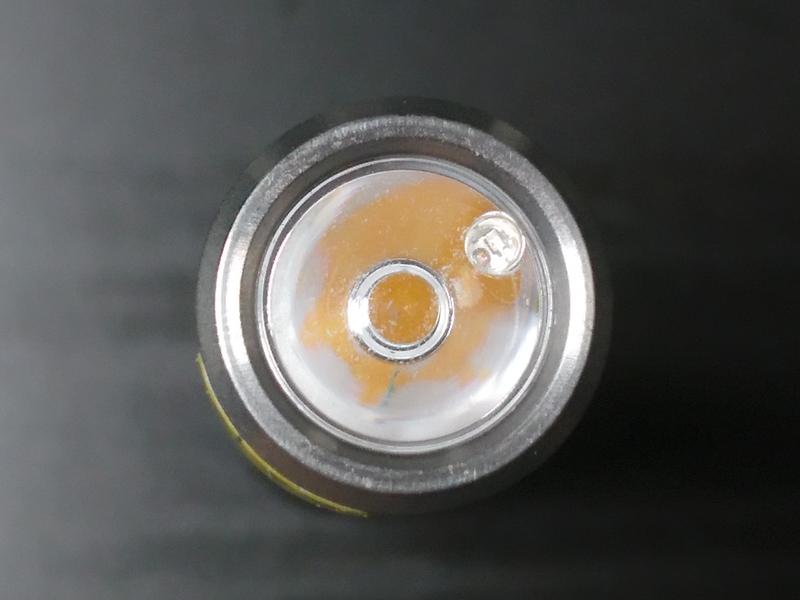 As with most Fenix products, the LD02 V2.0 does what it says on the tin. Fenix goes so far as to include runtime graphs and list the difference in runtimes with alkaline and NiMH batteries. There are no surprises here. The build quality feels particularly nice compared to what's usually seen in this market segment. Efficiency on high is the only notable weakness in the LD02's execution, but I'd be inclined to suggest that anyone for whom that's a problem use a larger light with a larger battery. Efficiency is quite good on medium. 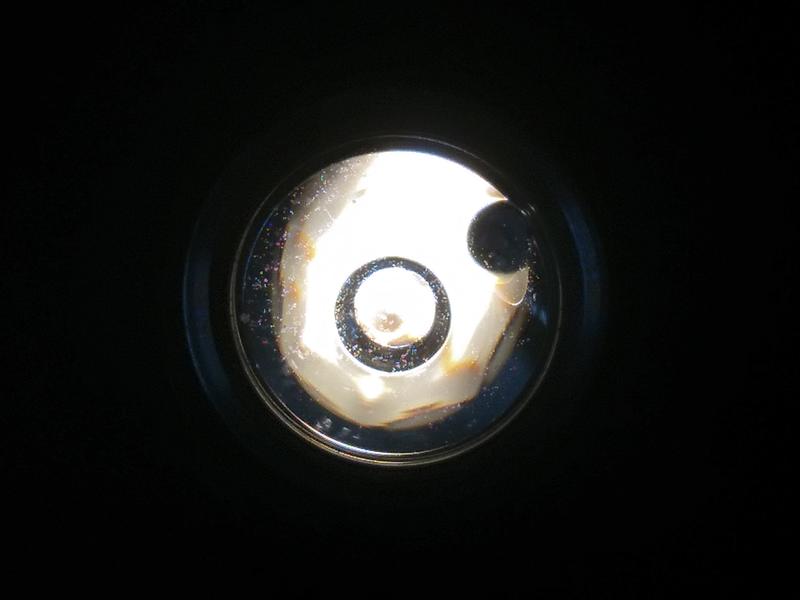 The LD02 v2.0 includes spare O-rings, a user manual, and an alkaline battery. 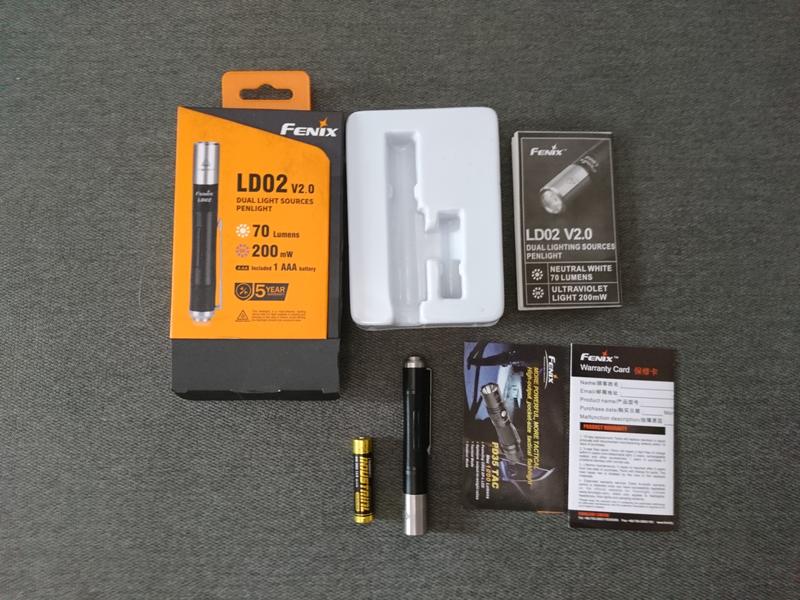 For those unfamiliar with the terms above, reverse-clicky means a mechanical switch that turns on when fully released after a press, as opposed to a forward-clicky that turns on when pressed and stays on when released (if fully-pressed before release). Off-time memory means that a quick on/off cycle or half-press of the switch will switch to the next mode if and only if the time the light is off is short enough.

Advertised performance is with unspecified NiMH and alkaline batteries. Fenix advertises the same output for both battery types, but different runtimes. Test results are with a Panasonic Eneloop 750 mAh NiMH AAA battery unless otherwise noted.

Runtimes without graphs are estimated from power consumption. For efficiency calculations, the capacity of the Eneloop is assumed to be 0.9 Wh in all modes.

Calculating efficiency with the alkaline battery is not possible as its capacity under these conditions is not known, however it produced 30.6 lumen-hours on high, while the Eneloop produced 41.5. An accurate current measurement was not possible on high.

The LD02 v2.0 produces warm white light with a color temperature around 3200K. It's a little cooler than the average incandescent, but not much. The color rendering index is advertised as 90+, and I have no trouble believing it. The tint is a little greener and less even than I'd prefer, but only a little. Those who miss the look of incandescent bulbs should be pleased.

The UV emitter produces little visible light, though it does excite the phosphor of the white emitter enough to add some orange. Both the visible light produced and the appearance of UV-reactive objects are similar to a 365nmn Nichia 276A, but the UV of the LD02 is not focused evenly due to the offset position in the optic. 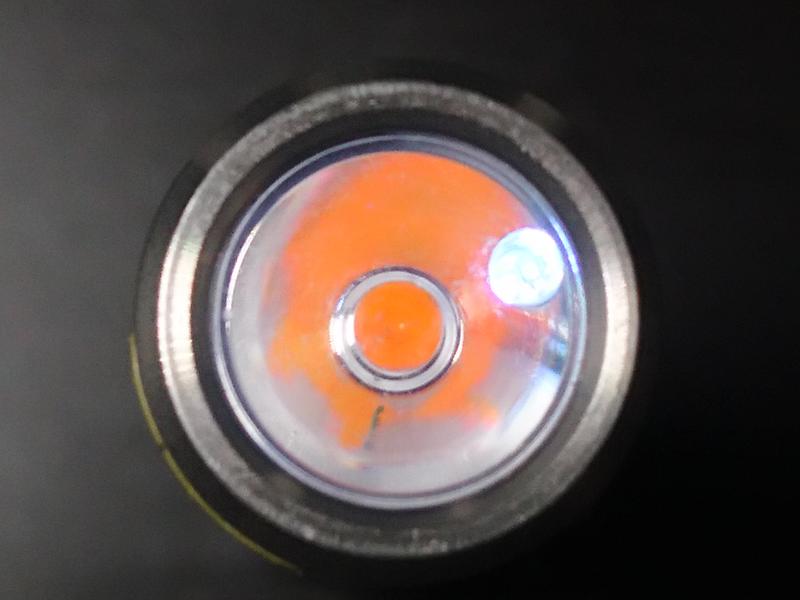 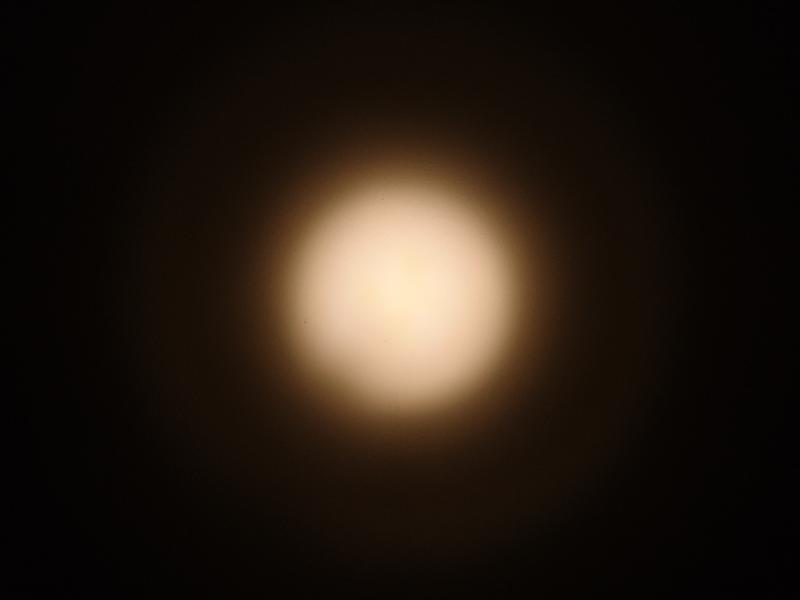 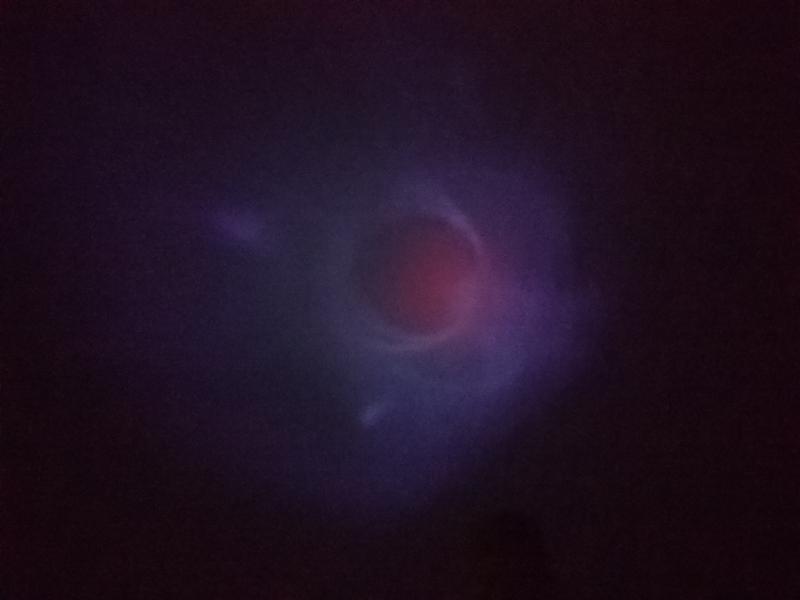 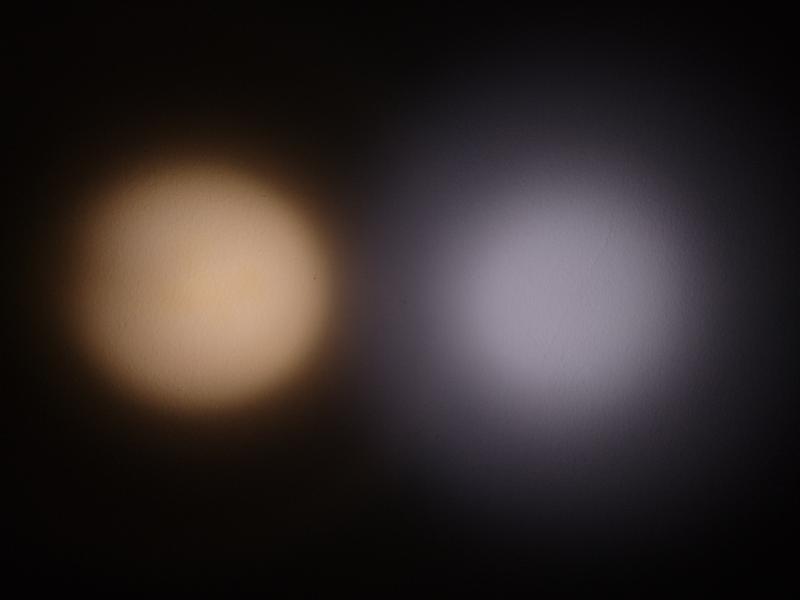 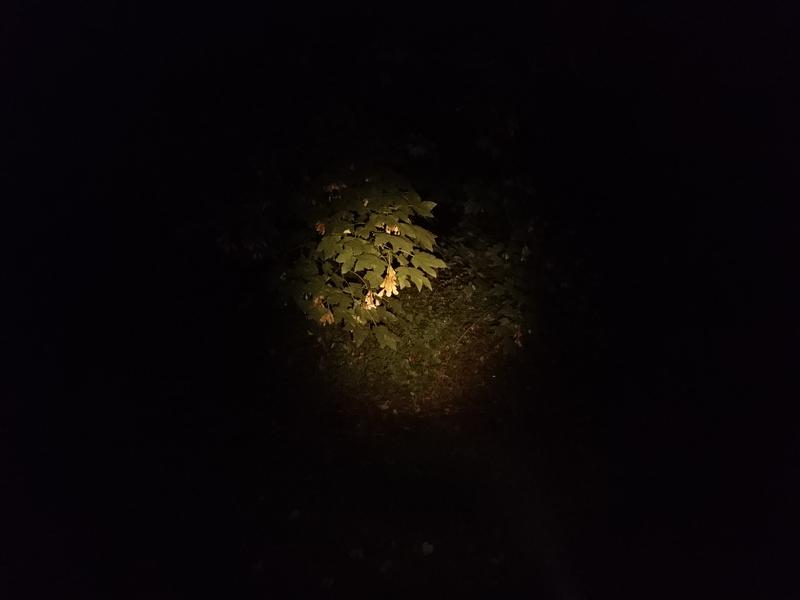 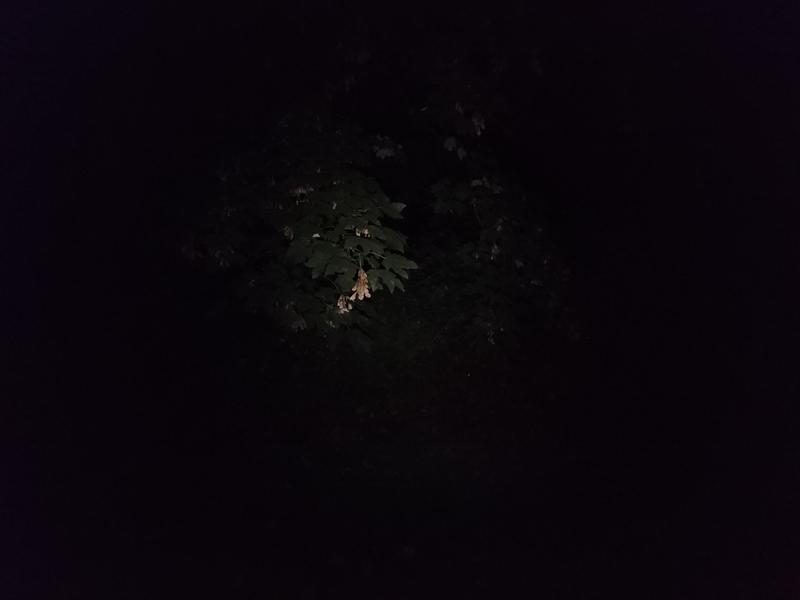 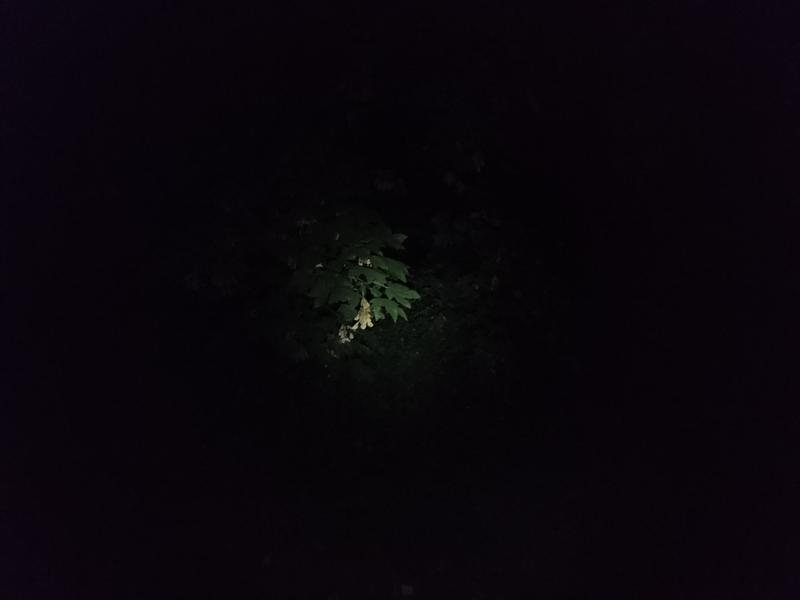 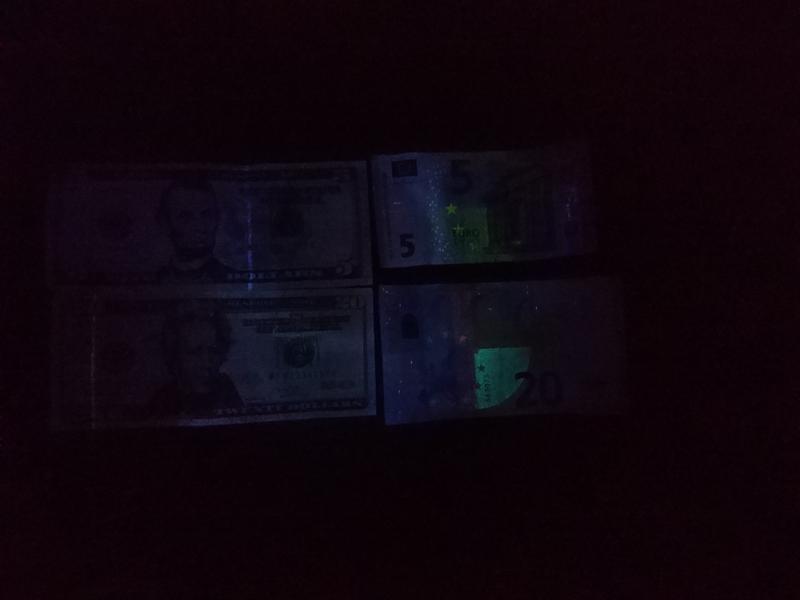 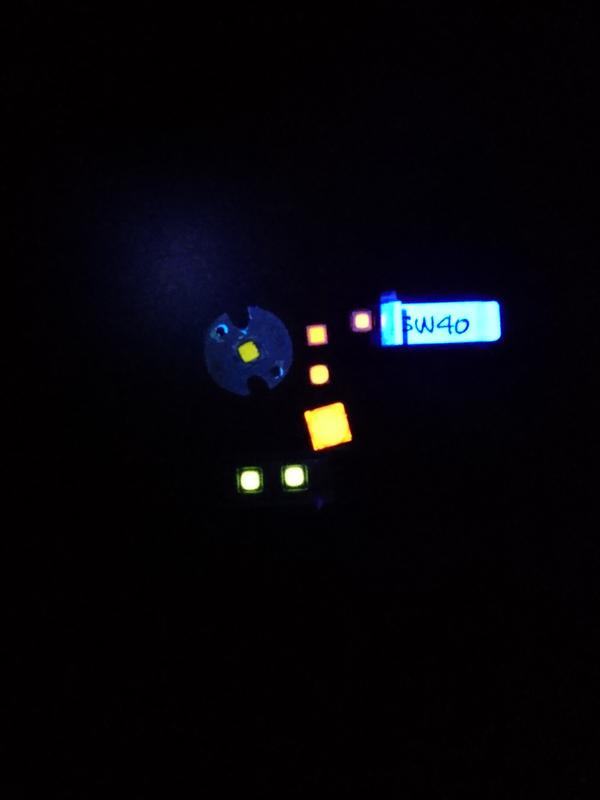 The LD02 v2.0 is solidly built, with claimed IP68 dust/water resistance and 1 meter drop resistance. A brief immersion test showed no signs of water ingress. My only complaint is that the plastic optic is exposed without a glass lens, increasing the risk of scratches. Only the head is removable; neither the tail nor the bezel can be dissasmbled easily, due to what I assume is a large amount of strong adhesive.

The LD02 v2.0 has fine grooves for grip, and a switch that's easy to press, with good tactile feedback. It's small in the pocket, the clip is secure, but not unduely grabby. The grooves are effective at making the slim flashlight easy to manipulate. There are no issues here.

The only batteries recommended for the LD02 v2.0 are alkaline, lithium and NiMH AAA. Higher voltage 10440 Li-ions are specifically contraindicated in the manual. The manual indicates that NiMH is preferred, and my testing showed both higher output and longer runtime on high than alkaline.

The head of the LD02 v2.0 is quite well secured with threadlocker or glue. It might be possible to remove the bezel with heat and tools, but it would be difficult. So far, the temptation to try installing a Nichia E17A has not outpaced my desire to continue having a working LD02. This is not a modification-friendly light.