This Acebeam UC15 (affiliate link) was providen by Killzone Flashlights for review. Use coupon code "zakreviews" for a 10% discount on most products (not the UC15), and to give me a kickback. 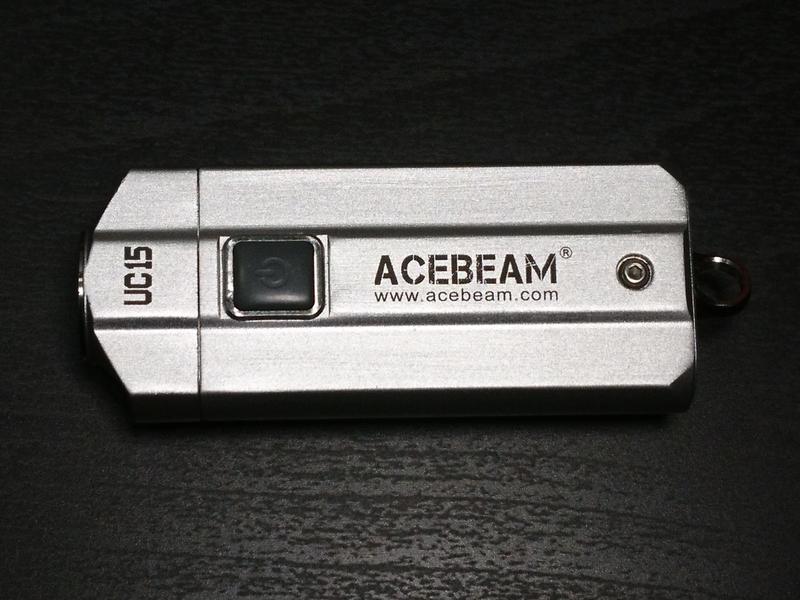 The Acebeam UC15 is a 2xAAA/10440 light in a rare side-by-side form factor, with white (high-CRI optional), red, and ultraviolet LEDs. Its form factor resembles sealed-battery onboard-charging lights like the Nitecore TIP and Astrolux K1, but it lacks onboard charging, favoring standard-size removable cells. All functions are controlled from one button, which places some limitations on the user interface - more on that later. 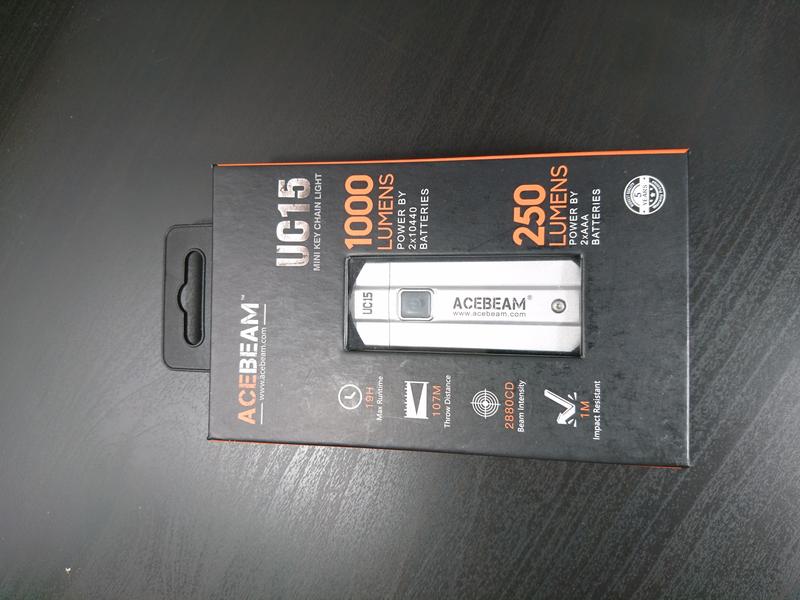 It's refreshing to see a little-used form factor from a major brand like Acebeam. The appeal of the form-factor and feature-set is perhaps a bit niche, but it's perfectly usable as a white-only light. Two AAA or 10440 batteries fall a bit short of the capacity possible with AA or 14500, but compare well with 16340, which may come as a surprise to some. The UC15 is a fundamentally good concept, but not one with universal appeal.

The UC15 uses a rectangular form factor with a battery compartment plate held in place by a central screw, which also serves as a keyring or lanyard attachment point. A removable pocket clip is included, which supports a bezel-up orientation only. The side switch is slightly raised, easy to find by feel, and requires some force to press, making accidental activation improbable. A red/green LED is located under the switch, acting as a battery status idicator. It's larger than some of its competitors, but its battery capacity exceeds the sealed pouch cells used in most other compact rectangular lights. The light claims to be dust and splash resistant, but not submersible. That's normal for the category, but a bit disappointing. A selection of body colors is a nice touch, with black, silver, blue, and magenta offered. 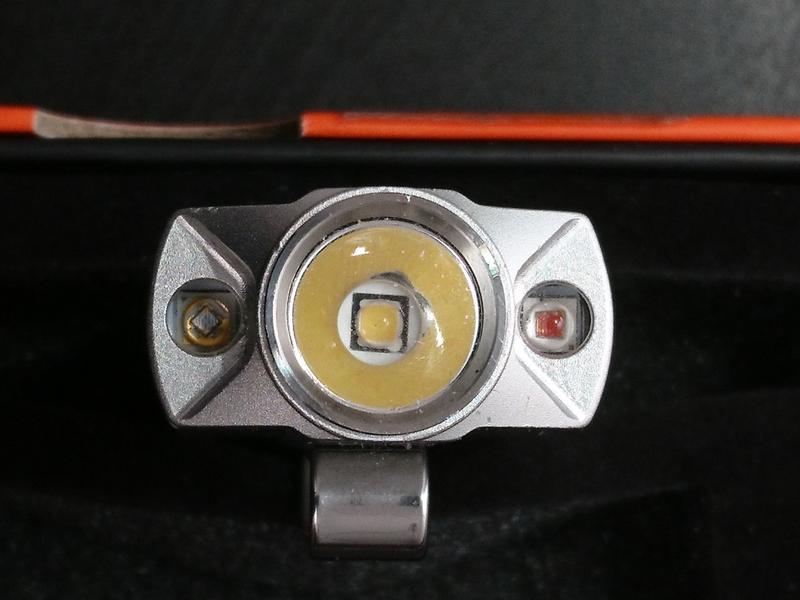 A potential design weakness is that the shelf to which the MCPCB is attached is hollow under the white emitter. In theory, this could contribute to output sag on higher modes and hurt the lifespan of the LED, but it doesn't appear to be a major problem in practice, as the highest modes with Li-ion batteries are time-limited, and there doesn't seem to be significant thermal sag at lower levels. 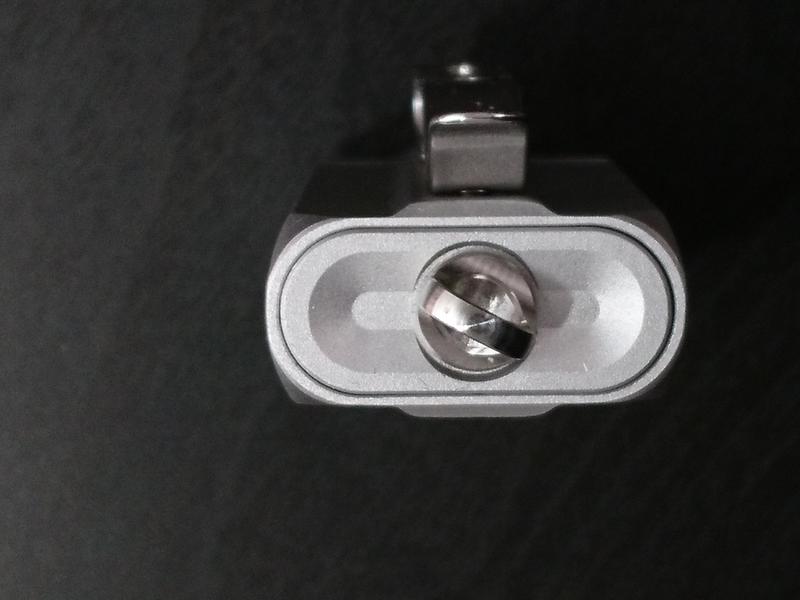 The main white emitter is either a Cree XP-L (cool white, low-CRI), or a Nichia 219C (neutral white, high-CRI) in a smooth reflector. I generally prefer a bit of texture on the reflector, and it would have been welcome here for a smoother beam pattern. The secondary emitters area red Cree XP-E2 and a 365nm ultraviolet Nichia 276A. They are unfocused, which I think is adequate for their use cases, though I'm not entirely sure what the use case for high-output red in a compact everyday carry light would be. The UV emitter also has fairly high output, and is suitable for checking security features on documents and use with UV leak detection dyes. 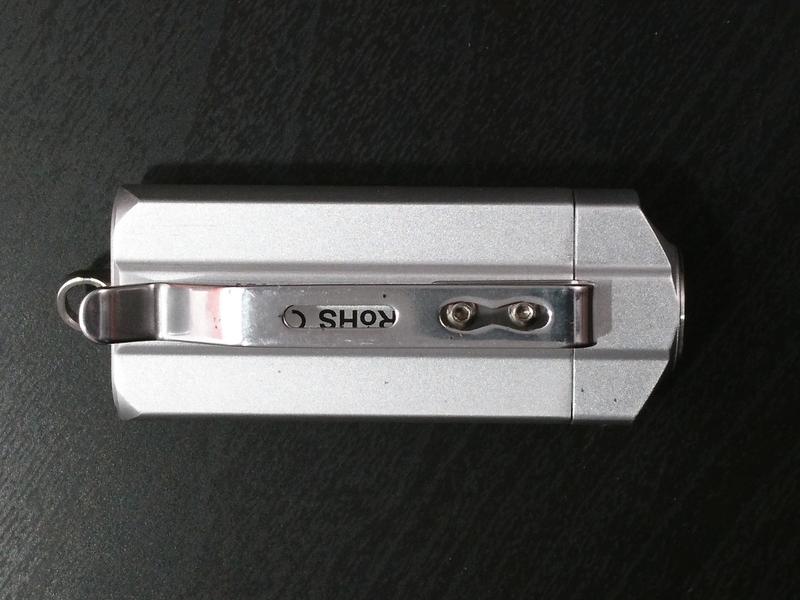 The user interface it Acebeam's usual e-switch UI for the white emitter, which is significantly similar to those used by Thrunite and Olight, with shortcuts from off to the lowest, highest, and last-used modes and single-click on/off. Access to the secondaries, however requires holding for 2 seconds from off, and UV requires releasing the button followed by a second long-press. I think they've put a bit too much on one button, and second button would improve things here.

Acebeam's build quality has been solid every time I've encountered it, and the UC15 is no exception. Everything fits. Everything works every time. Nothing lookss unfinished. Driver efficiency is quite good, and it's close enough to its output targets. There's no PWM. The smooth reflector doesn't result in the smoothest beam, but it's hard to spot any artifacts outside of a white wall. There's low-voltage protection for both NiMH and Li-ion, which is rare, and something I'm very happy to see here.

The UC15 is well-done. Anyone who likes the concept and design should be satisfied with how the UC15 is executed.

I think the UC15 deserves more attention. With 10440 batteries, it compares well to 16340-powered lights, but in a thinner, flatter form factor. With rechargeable AAAs, it maintains respectable performance. Its cost is comparable to some of the more popular examples of that category as well, though perhaps Acebeam could offer a white-only version at a lower price point; UV emitters in particular are quite expensive.

The option of a high-CRI emitter combined with Acebeam's e-switch UI and enough battery for light-duty use makes the UC15 a good choice for lighter everyday carry, however the lack of a proper moonlight mode and time-consuming access to secondary emitters may dissuade some buyers.

The UC15 has a choice of ~6500K, low-CRI Cree XP-L, or high-CRI Nichia 219C. In either case, it can be had in black, silver, blue, or magenta, though not all dealers will have all combinations.. 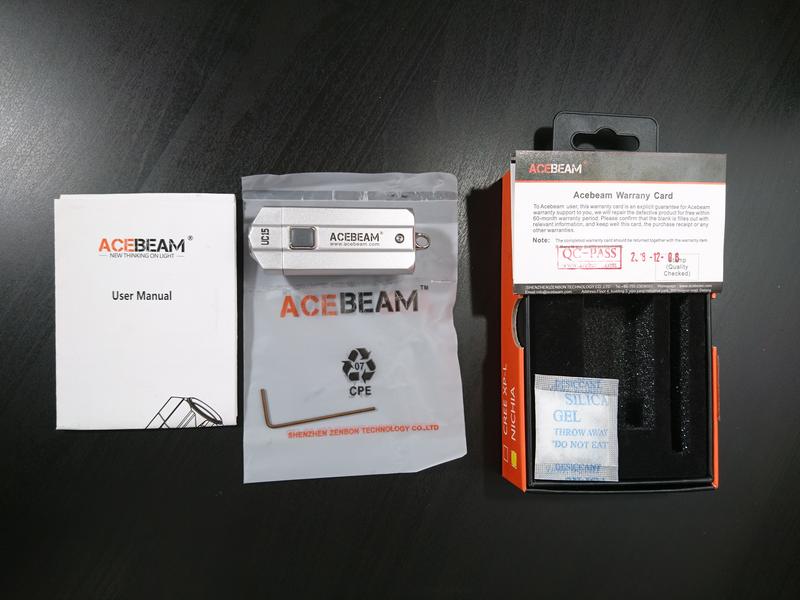 This is both easy for anyone to use with no instruction, and versatile for those who know the shortcuts as long as it's in a white mode. The secondaries, which are stored in mode memory could be a point of confusion for someone who has not read the manual.

Runtimes without graphs are estimated from power consumption and do not account for possible reductions in output over time.

* Li-ion turbo measurement was taken before 30 seconds due to throttling related to voltage sag on the weak test batteries. It should be treated with more skepticism than usual.

** I have no calibration for red output, so this estimate should also be treated with extra skepticism.

This UC15 uses a ~5000K, 90 CRI Nichia 219C. Its light quality is typical for the emitter: the color temperature is similar to midday sunlight; it's visually slightly green on a white wall, which is not noticeable outdoors, and colors are rendered vividly and accurately. There's a slight ring in the beam where the corona meets the spill, which is not enough to be distracting outdoors.

Lacking another place to put this in my current format, the UC15 produces FIXME cd/lm. 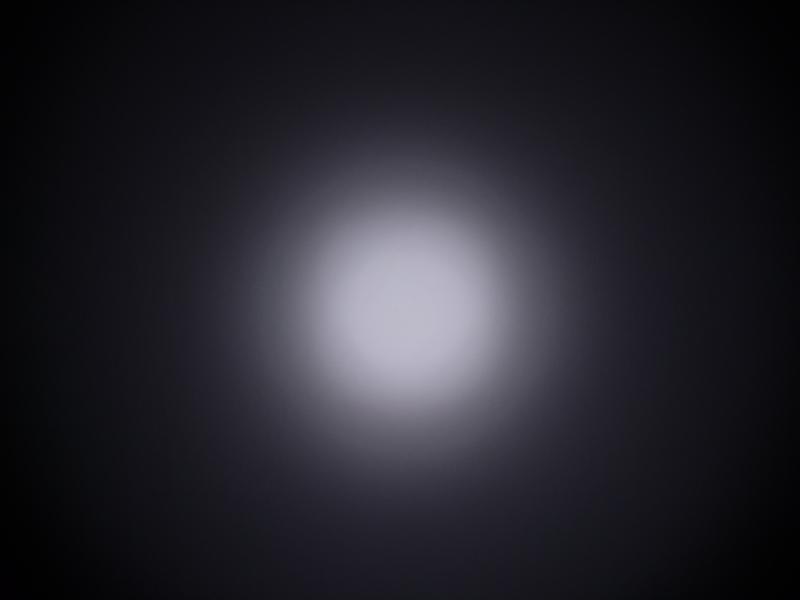 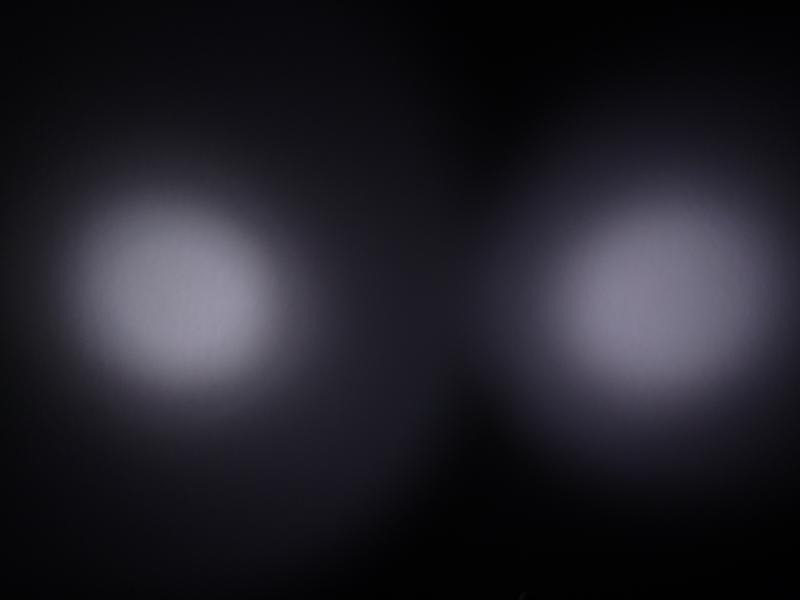 vs Armytek Wizard Pro 144A (right) 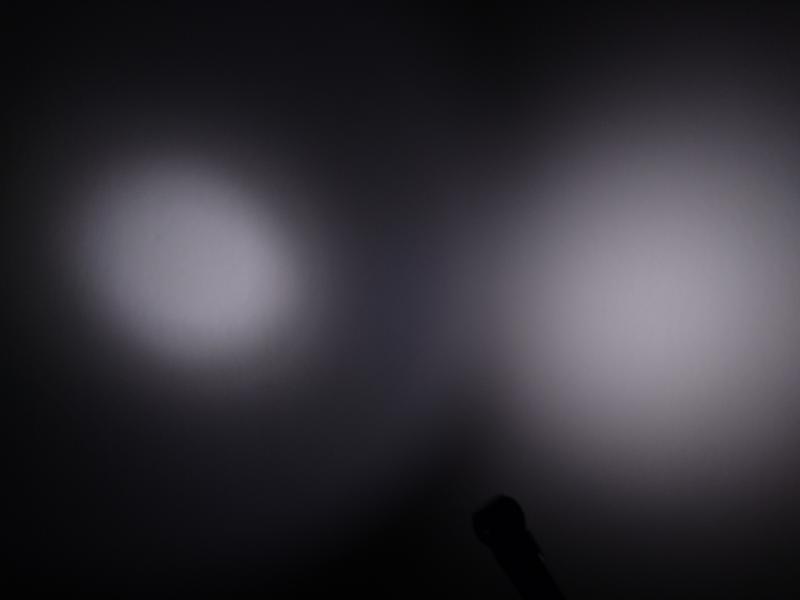 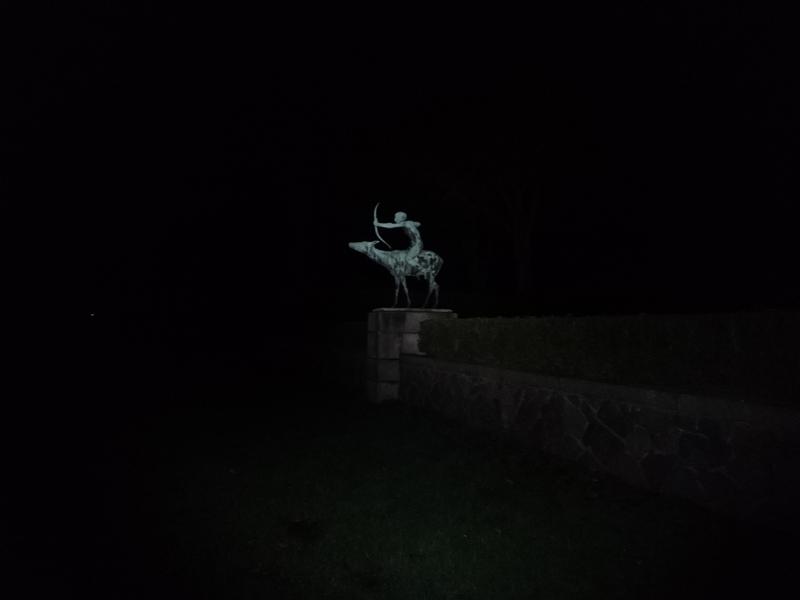 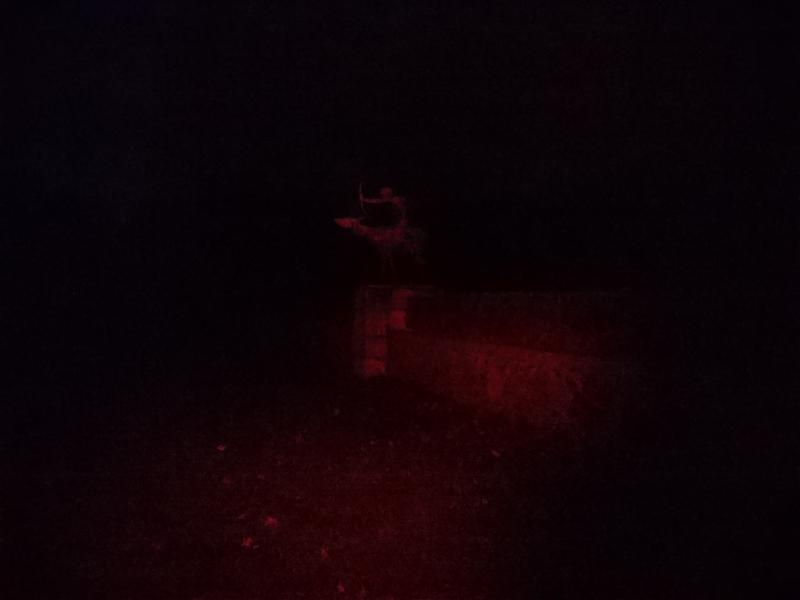 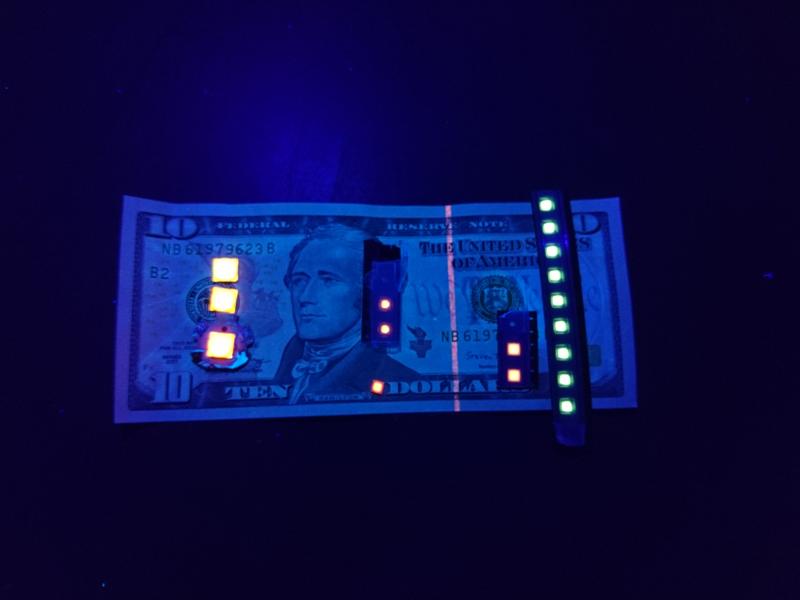 The body of the UC15 is aluminum, with a removable battery cover in the back using a captive screw, and a frontal cover bolted to the shelf and acting as a pressure plate for the MCPCB. Most of the driver is in the central spine, allowing room for relatively large components, which probably explains some of the UC15's efficiency and stable performance. 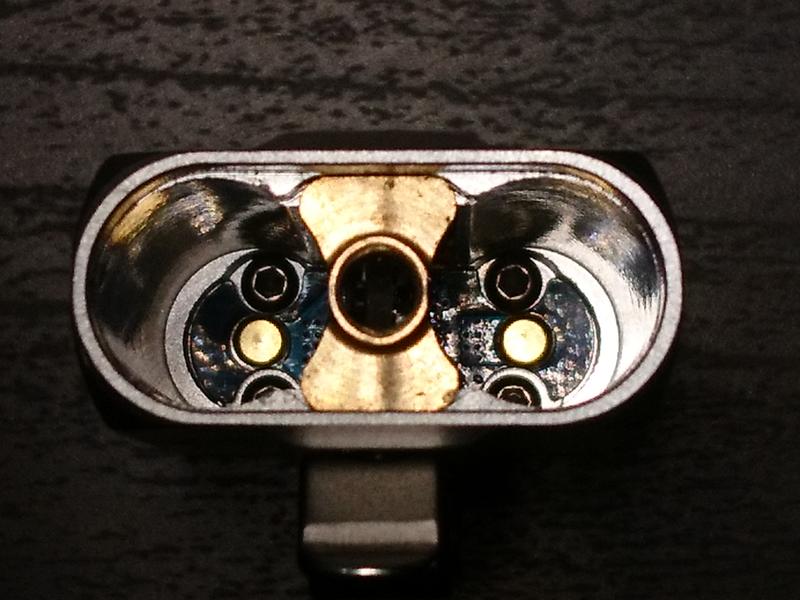 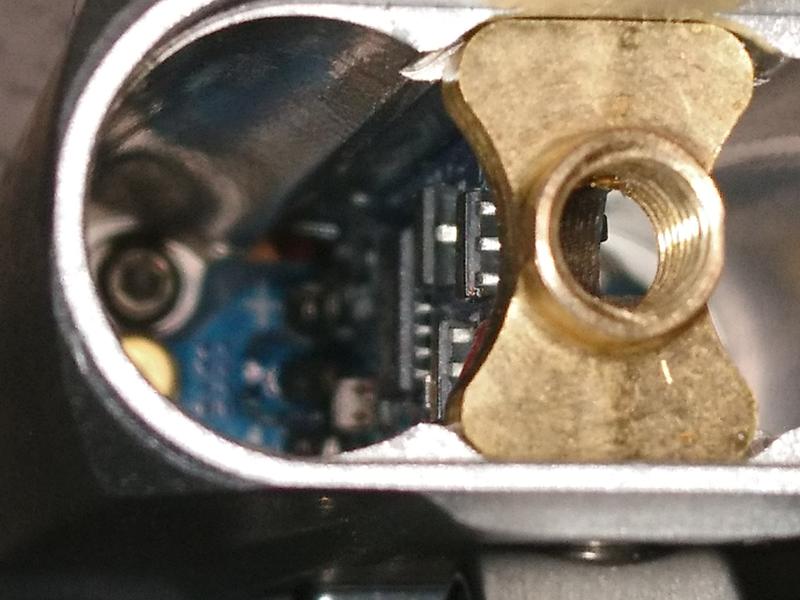 All the pieces fit well, and there are no sharp edges or visible tool marks. There's also no attempt at waterproofing the battery cover. It seems to me that there could have been a rubber seal around its perimeter.

Using the pocket clip, UC15 is very comfortable to carry. While the clip looks bulky, its location outside the pocket combined with the UC15's thin body makes its presence hard to notice. The bezel-up-only orientation doesn't match my preference, but doesn't create any objective problems. The switch is easy to find by feel, as it's slightly raised, but hard to press by accident on account of the firm pressure required. In the hand, the smooth body doesn't provide much grip, but it's easy to hold as long as the pocket clip is installed.

Carried on a keychain, the UC15 is quite large compared to most competitors, but no worse than a 1xAA or 1x16340 light.

If it fits, it's probably supported. The UC15 supports NiMH, lithium disposable, and alkaline disposable AAA, as well as Li-ion 10440. The low-voltage protection might result in usability issues with LiFePO4 10440s, but they too would likely power it in a pinch. Button and flat top cells will both make contact. 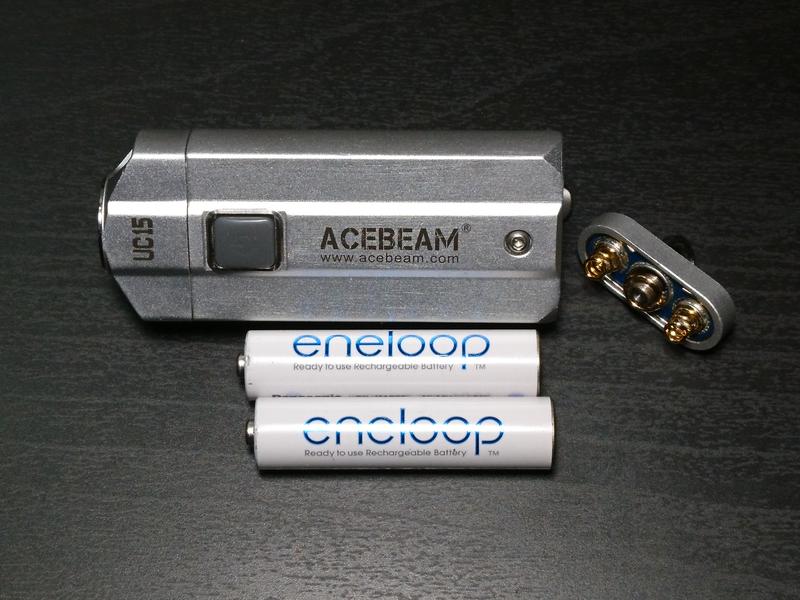 It is possible to run the UC15 on only one cell, but this will likely limit performance on higher modes. Alkaline batteries will also likely have poor performance outside of low modes.

Based on images I found online, the UC15's front piece is held on by four hex screws, removal of which gives access to the MCPCB, emitters, and reflector. Removing another screw on the body should allow the driver to slide out.

All three emitters are on a single MCPCB, and could be replaced as follows:

One source claims 15 lumens from an SST-20 in place of the red XP-E2. Assuming the regulation is based on output current, a white emitter replacing the UV should be higher.