This Acebeam TK16 (affiliate link) was providen by Killzone Flashlights for review. Use coupon code "zakreviews" for a 10% discount on most products (not the TK16), and to give me a kickback. 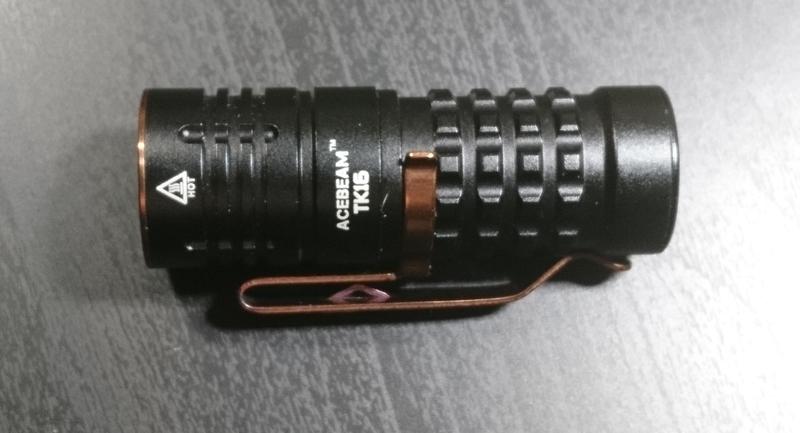 The TK16 is a compact everyday carry flashlight running on a 16340 battery. Since about one in three EDC pocket dump photos on the internet contain an Olight S1 variant, it's hard to argue with the concept from a business perspective. What some potential buyers may find missing is that while the TK16 includes a battery, it does not have a charger built in, which many buyers in this segment seem to prefer. 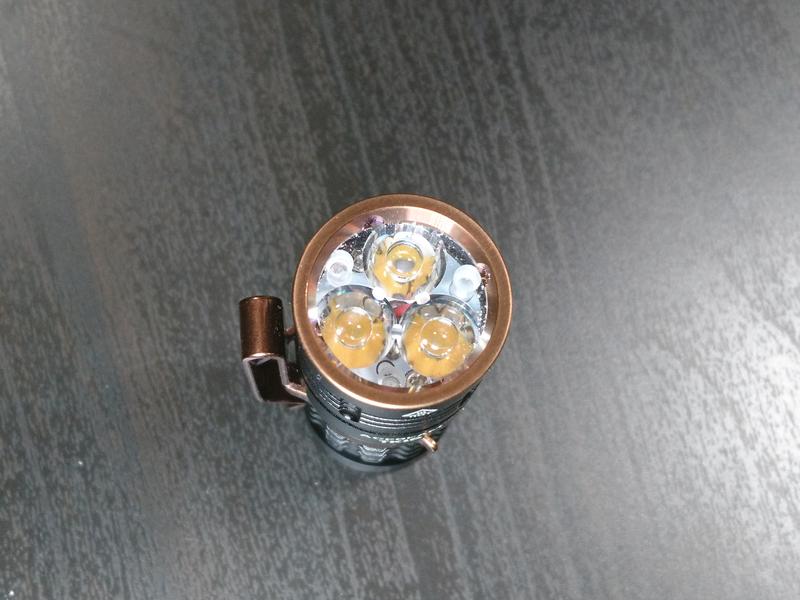 The tail e-switch is new for this form factor; Acebeam has offered several lights that technically use a tail e-switch, meaning that a switch on the tailcap sends a signal to the driver's microcontroller, which is powered even when the light is off. Prior to the TK16, these either emulated the behavior of a mechanical switch that disconnects power from the light completely, or sent a signal that simply requsts max output. The TK16 uses the tail e-switch for a multi-mode UI with shortcuts from off to low, high, and last-used much like the Lumintop FW series. 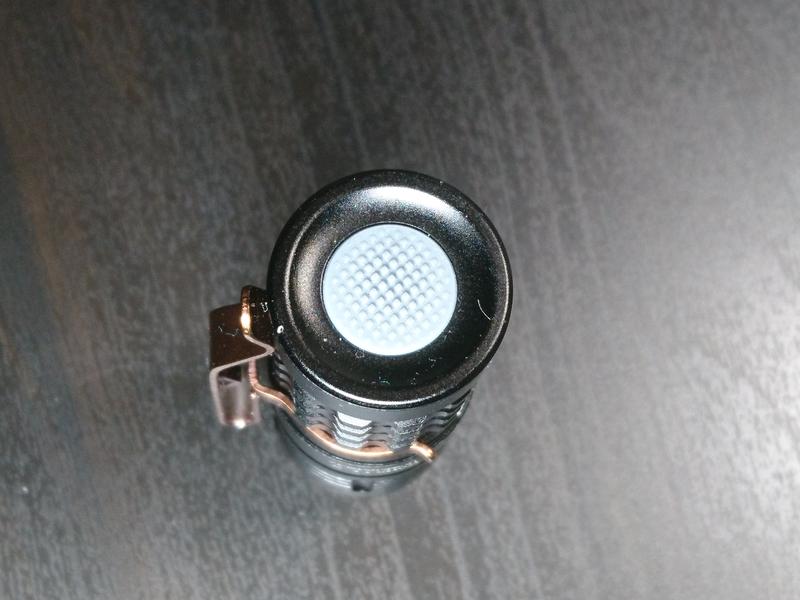 The triple emitter design has been popular in larger lights, and it's nice to see it come to this form factor. Finally, offering a choice of three emitter types with different characteristics strikes me as a smart decision, allowing Acebeam to meet the needs of a wide range of users.

The TK16 is as small as it can be and still do what it needs to do, but not smaller. It's slightly larger than the smallest lights using the same battery, but it has a tailswitch, dual-wall body tube, springs on both ends of the battery, and needs to handle more energy than most.

Three emitter options are offered: Luminus SST-20, for color quality, Osram White Flat for throw, and Cree XP-G3 for output. As different users weight each of those attributes differently, I'm glad to see the options. Of course, I think it's an easy choice: color vividness and accuracy are important for seeing clearly in most situations, and SST-20s with a color rendering index of over 95 deliver it while still exceeding the output and throw of any mainstream rivals. 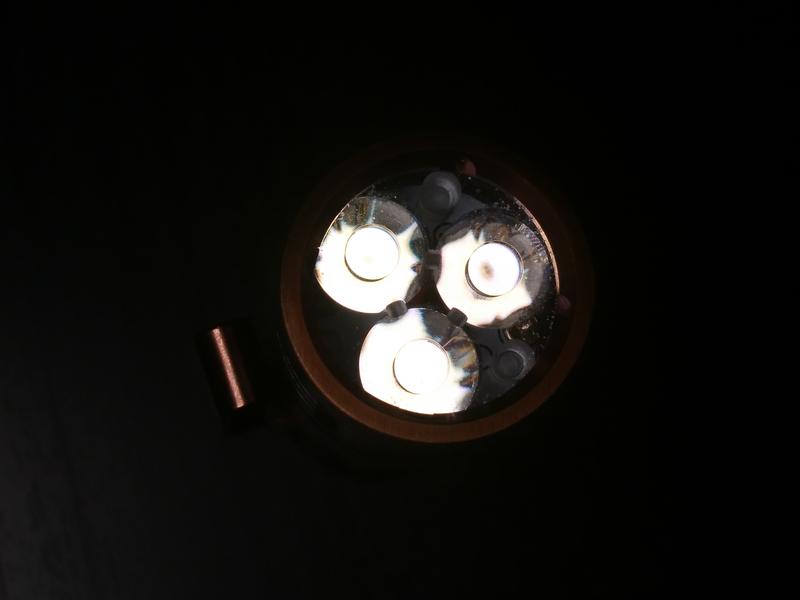 The UI is Acebeam's usual e-switch UI with shortcuts to the lowest, highest, and last-used modes from off. It's similar to those used by Thrunite and Olight, which is good. The shortcuts are useful, and someone who hasn't read the manual will surely manage at least on/off in a useful mode. One oddity is that there's an option to set the maximum output to a claimed 1250 lumens in "power" mode and 750 in "eco" mode. I find this useful in that 750 lumens is a better heat-limited burst mode for most users for a light this size since it heats up much more slowly, but Acebeam can still use the big number to sell lights (and I can use it to show off). Eco mode may also be useful for compatibility with 16340 batteries that aren't rated for as much load as the included one.

I'm less enthused about the physical design of the TK16. The huge knobby texture on the body tube seems out of place in a small everyday carry flashlight. The pocket clip, I dislike significantly. Its upper pinch point is too tight for thick fabric. The ramp contacts the flare in the body near the tail in a way that makes it hard to insert into the pocket. It's reversible, but rubs when unscrewing the head if installed bezel-down. I'd enjoy this light much more with a different clip. On a positive note, the TK16 has a glass lens over its plastic TIR to prevent scratches, which sets it apart from some of its most popular competition. 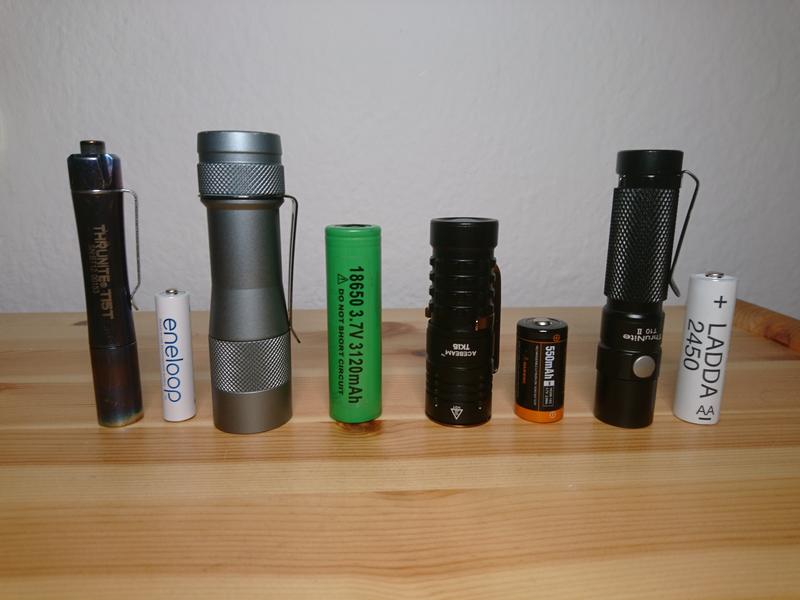 Packing a triple with a 20mm optic into a 22mm diameter body is impressive, and I can confirm it's an unmodified Carclo 10507 optic, which is the same series as is used in many DIY and custom lights, the FW3A, and others. If anything, it's so compact that the tail e-switch doesn't offer the ergonomic advantages it does on a larger flashlight. The optic is relatively easy to swap, for those who prefer, for example the frosted 10511 or the eliptical 10510.

There's not much to complain about with the TK16's execution. I'd say it does what it says on the tin, but that's not quite right. I tested more output than claimed in all modes, and much more throw. Runtimes are a bit shorter though, so it's possible changes were made to the optics and drive current after the documentation was written. Reviews by others confirm the difference in throw for the SST-20, though the Osram version appears to overstate its throw. Incorrect documentation is my only complaint about the TK16's implementation.

The physical build of the TK16 is flawless. There are no defects, blemishes, unfinished or imprecise pieces. It has none of the reliability issues with its signal tube that the FW3A does, most likely because it has a flat spring on the driver to ensure positive contact. Assembly is straightforward, with the bezel and tail plug both easily unscrewed, however the signal tube and switch PCB seem to be installed in a more permanent fashion. 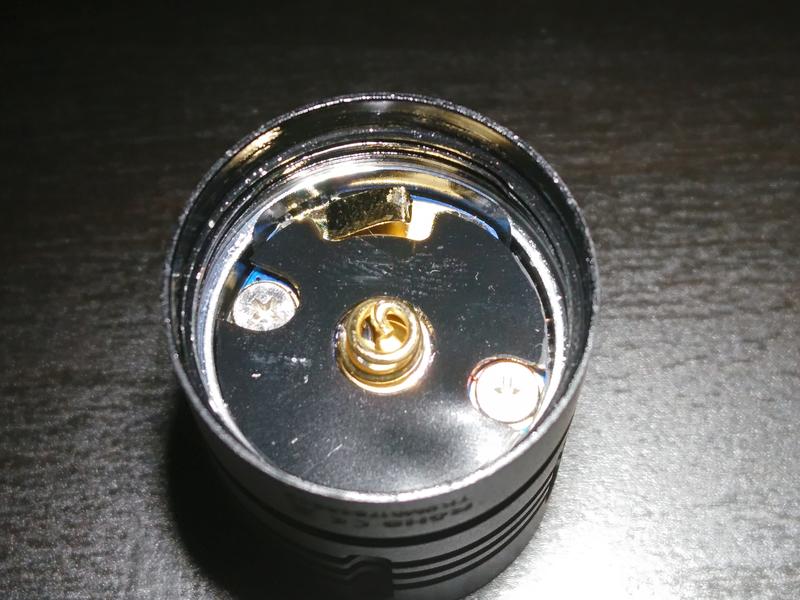 In the hobbyist flashlight world, we're used to seeing triple emitter lights using electronics designed for compactness and ability to delivery the most watts to the emitter per dollar of component cost. That's not the TK16. This flashlight makes as much as 140 lm/W while producing full-spectrum light makes colors look vivid and natural. This efficiency means the TK16 with a 16340 battery can match the runtimes at similar power levels of hobbyist lights using the larger 18350 battery. 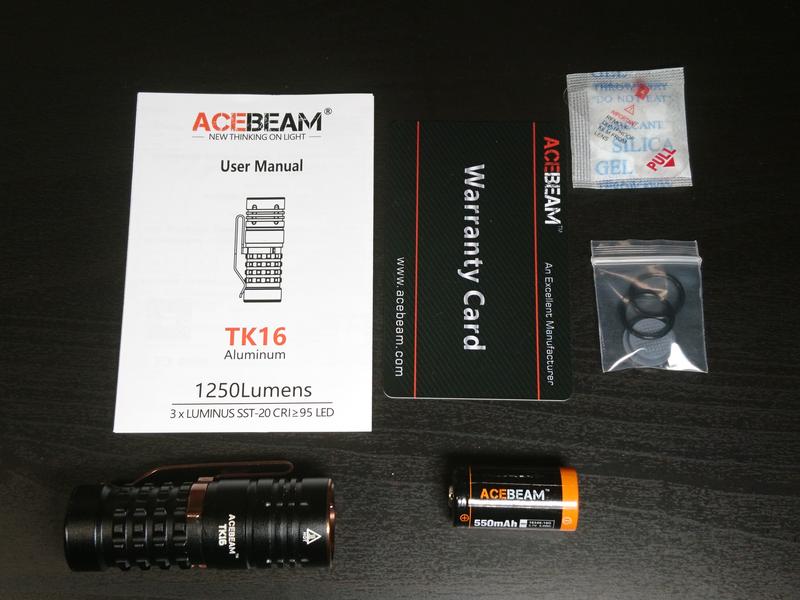 The TK16 uses an electronic tailswitch with a double-walled battery tube to carry the signal. Unlike other Acebeam models with the same physical construction, the tailswitch is the only switch, and it uses Acebeam's usual shortcut-based e-switch UI, which is similar to those used by Thrunite and Olight.

This is both easy for anyone to use with no instruction (it will always turn on and off with a single press of the button, in a medium mode of some sort), and versatile for those who know the shortcuts.

All testing was performed using the included Acebeam 550 mAh 16340 battery.

Max mode graphs were made with a cooling fan, resulting in less thermal throttling than the manufacturer's test.

The TK16's beam is typical for the Carclo 10507 optic: a large hotspot and dim spill, with some artifacts in the spill. The SST-20s have excellent color rendering, and a bit of noticeable green tint in lower modes when compared side by side with other light sources, but I don't really notice when using the TK16 by itself. 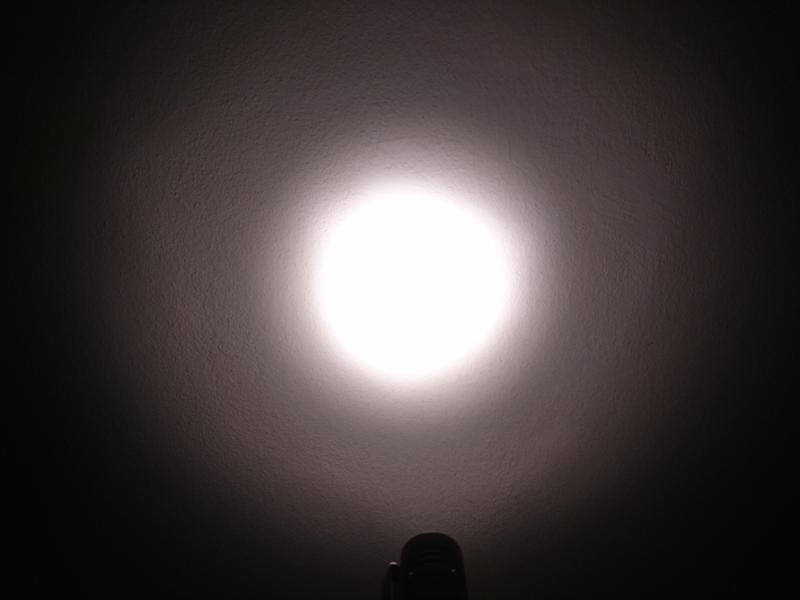 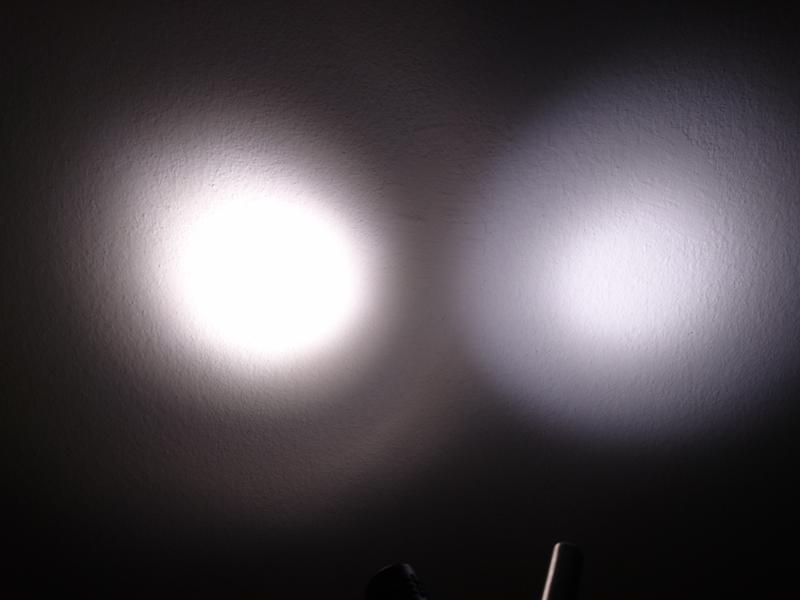 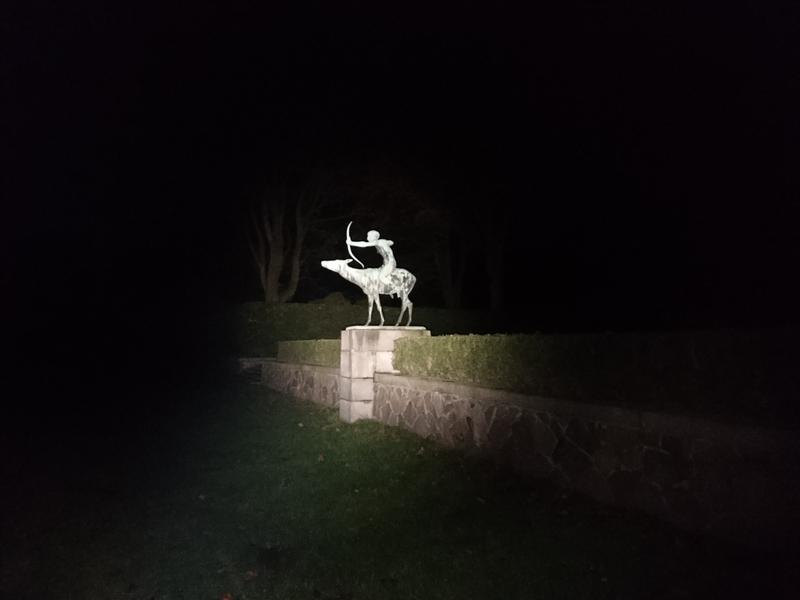 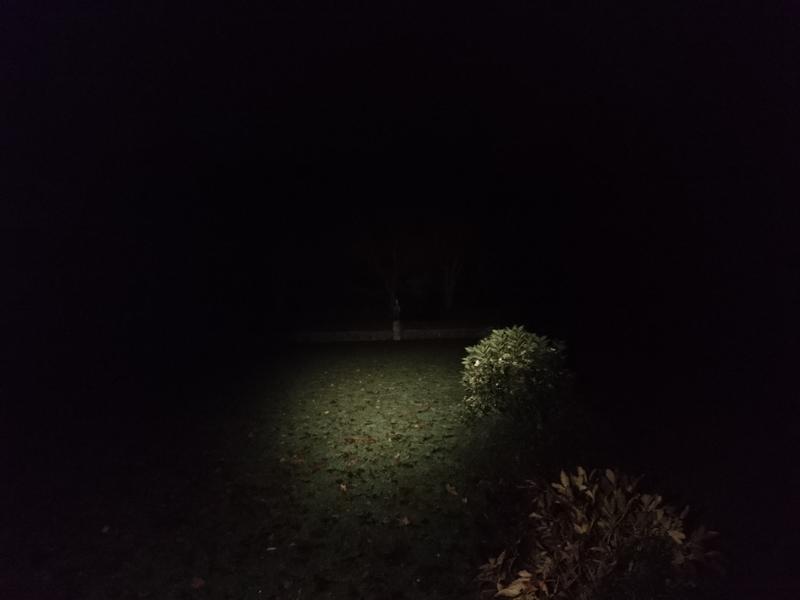 The TK16 is as compact as I think possible without compromising build quality. The bezel and tail plug screw in with no glue, fit well, and seal the body against water. Acebeam advertises 2 meters immersion. The anodizing looks and feels thick. The threads are fine, but square-cut. There's a glass lens over the plastic optic. The pocket clip has a tight friction fit and will never come off by accident. As usual, Acebeam makes a well-constructed light.

I like tail e-switch lights, but the 1x16340 form factor is quite short for that to make ergonomic sense. It works, but an overhand grip will be awkward for users with larger hands. The knobby texture provides adequate grip, but catches coming in and out of a pocket.

My primary ergonomic complaint is the pocket clip. There's very little ramp, so precision or pulling the clip away from the body is necessary to get pocket material between the clip and the body. Near the top of the clip, there's a pinch point for additional grip on the pocket, but it's very tight and doesn't work well with thicker material. It seems to be intended for bezel-up carry, which doesn't make sense to me with the tail e-switch. Bezel-down works, but the clip rubs on the head when unscrewing it for battery removal, which is frequent given the small battery and lack of onboard charging. I hate this clip, and will probably eventually track down an alternative.

The TK16 uses a single 16340 battery. Full performance requires a battery capable of about 5A continuous output, which is high for the battery type, and can be difficult to source at times. One is included. Other 16340s will work, and springs on both ends of the battery tube mean that protected, unprotected, flat, and button top should all be fine. Some 16340s may require eco mode, or stayinng out of max.

There is low-voltage protection at 2.7V, with a series of warning blinks, followed by a stepdown, and finally a hard shutoff.

A single CR123A disposable lithium battery can be used as a backup power source; output is limited to 400 lumens.

The bezel of the TK16 unscrews fairly easily, though I did need snap ring pliers to loosen it. The lens is a bit of a tight fit, and requires tapping against a surface to get out. The second time I did this, I got the lens out and tapped once more by mistake, breaking it. A 20mm UCL works as a replacement, but it's slightly too thick, leaving a small gap between the bezel and body. Function and waterproofing are unaffected. 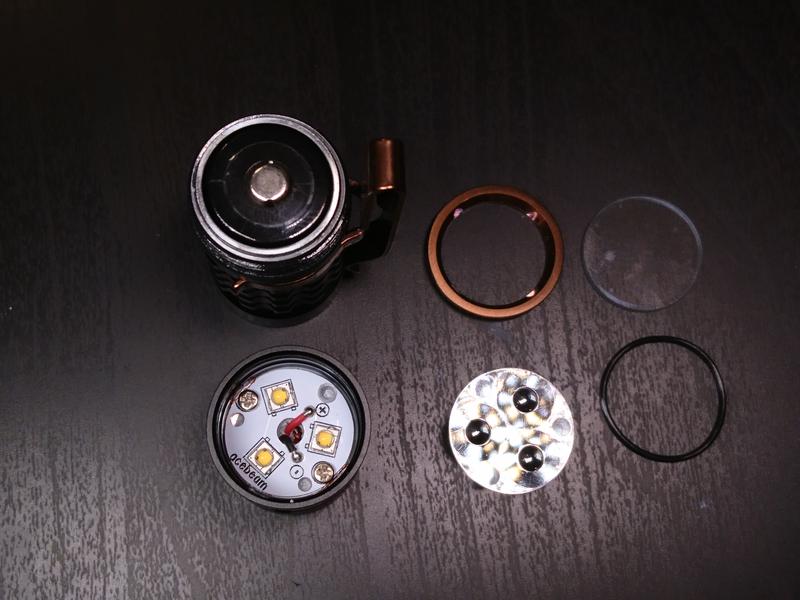 The optic is a Carclo 10507. I replaced it with a 10511 and saw 147m throw with a smoother beam. Emitter swaps should be easy, and while I have some slightly less green SST-20s, these emitters are fine, and a good choice for this light. I'm not eager to change them. Perhaps I'll try 219Bs some time in the future. 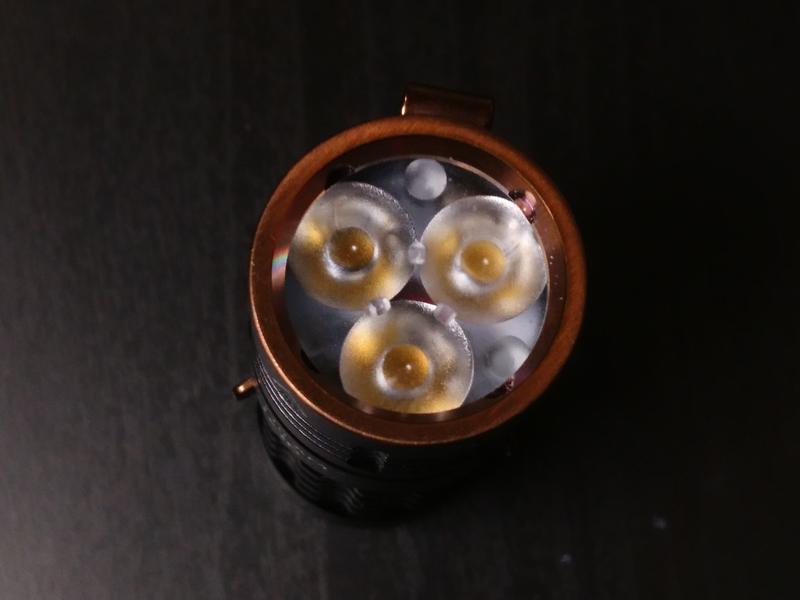 MCPCBs aren't quite as compatible. The TK16 has the emitters in series, while most hobbyist triples are in parallel. There are series boards available, and some Noctigon boards are configurable with jumpers. Screw holes and thickness are additional compatibility concerns.